Cop’s best beat is in a classroom 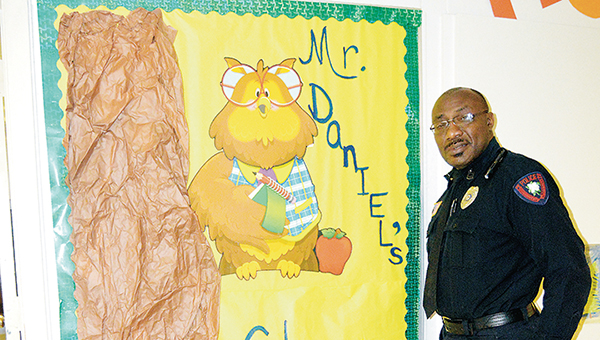 Photo by Orionna Brumfield/
Officer Fred Daniel divides his time between the Brookhaven Police Department and as a teacher at Lipsey School.

It is never too late to do more, no matter what you have done already.

Fred Daniel, an officer with the Brookhaven Police Department and a sixth-grade teacher at Lipsey School, is living proof of that. After serving three years in the Army and 10 years in the National Guard, he decided to come back home to serve his community in 1995 and has been moving forward ever since.

He received two associate degrees from Copiah-Lincoln Community College before becoming a full-time police officer and a college student at Jackson State University. “I was leaving work to go to school and school to go to work,” said Daniel.

The long hours only motivated Daniel because he knew that he was meant to serve others. “I wanted to become a police officer because I was born here and I wanted to make a difference… [Brookhaven] is a nice wholesome town and I wanted to keep it that way,” said Daniel. His passion for teaching came while being a police officer from experiencing young adults who did not know how to read on a daily basis on duty.

The teacher truly believes in making an impact while children are still maturing. He intertwines his word of wisdom in his lesson plans during the entire school year. “It feels good to have taught someone who is now going on to do great things… I look at myself and say that I had a part in that,” he said.

The police officer has worked with BPD for 22 years, and has been a teacher for 14. Although he plans to retire soon, he wants to continue helping others by teaching or starting a GED program in Brookhaven.

Businessman on the hunt to feed the hungry