Pictures of Brookhaven mayors through the ages grace a first floor wall at the Lincoln County Government Complex — all except Ward 2 Alderman Terry L. Bates, who claims he was the city’s mayor for two months in the early 2000s.

Bates is the longest serving alderman with 28 years on the board. “I just want the record to be right,” he said.

Bates wants the record to show that he served as Brookhaven’s mayor for two months as the result of the former mayor William Wallace Godbold Jr.’s resignation.

He also wants his photo to be included with those of the city’s other former — and current —mayor.

Bates has never fully investigated the situation until now after discovering a similar occurrence with Godbold Jr.’s father, who died in office. After his death, his wife was appointed the mayor for 60 days until another election occurred.

Bates said he is in a similar situation. “I was appointed by the board back then to be mayor after we received the official letter of resignation from Godbold Jr.,” he said.

City attorney Joe Fernald viewed the documents, which he says only shows Bates as mayor pro-tempore during that time. “There’s no legal authority to support that he was the mayor of the city of Brookhaven,” said Fernald.

Both Bates and Fernald will be working together to resolve the issue. They’ll request a  written opinion from the Attorney General Jim Hood.

However, Bates will take the matter in his own hands if he has to in the future, he said. 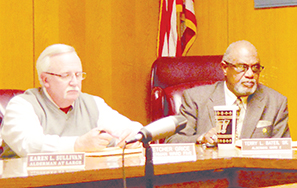 Photo by Orionna Brumfield/Terry L. Bates (right) claims he filled in as mayor of Brookhaven in the early 2000s after the resignation of W.W. Goldbold Jr. although records show him serving only as mayor pro tem. With Bates is Alderman Fletcher Grice.

Several offices to be closed for holiday

In observance of Christmas, The Daily Leader office will be closed Monday, Dec. 26. The newspaper will publish its Sunday... read more