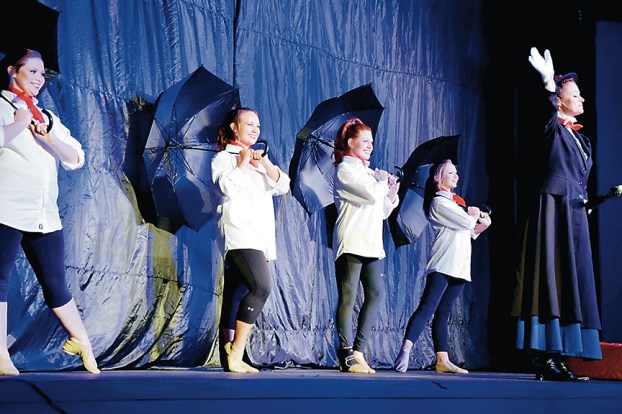 With the new year comes the desire to try new things or to revisit old goals.

Brookhaven Little Theatre has just the activity for those interested in singing, dancing and acting in 2017.

The theatre will hold auditions for its rendition of “Mary Poppins” the first week of the year, BLT executive director Emily Waterloo said.

In the past, they’ve limited auditions to just one or two days.

“We have planned three days of auditions based on reactions and attendance to the auditions for our last two shows,” she said.

Those auditioning will learn a short choreographed dance, perform it, sing a 60-second clip of a song and do a cold read, Waterloo said.

“When everyone arrives on the audition days, we will give them a number and they’ll fill out a form about themselves,” she said. “It will detail their dance, music and theatre experience, as well as any conflicts they might have leading up to the show.”

The auditions will take place on stage at the theatre, Waterloo said. Each person auditioning should bring the music on a digital device that they will perform in their 60-second time frame, she said.

“Ideally, those auditioning will sing a Broadway tune,” she said. “They can also sing a cappella if they choose to.”

“If someone only wants to audition for the dance portion, they just need to say,” Waterloo said. “They may not need to be prepared to sing if that is the case.”

The musical’s choreographer, Taylor Berry, will teach a short dance to everyone auditioning, and they will be required to perform it, she said.

Waterloo anticipates there will be 30 people in the cast of “Mary Poppins,” with 15 of those parts serving as leads in the musical.

“We are going to audition ages 8 and up,” Waterloo said.

The interest in this musical has been building since BLT announced its 2016-2017 theatre line-up, she said.

“We will very likely have callbacks for casting due to the high interest in the musical,” Waterloo said. “I’ve had calls from experienced community theatre actors from other towns. We’ve gotten some phone calls from some pretty phenomenal actors.”

Callbacks for the cast will occur in the weekends following the initial auditions, she said. Those auditioning will perform in front of an audition panel of approximately five, Waterloo said.

“Possible panel members could be myself, our producer Trey Waterloo or our directing team of Wendi Case and Lee Moore,” she said. “Our two directors are both experienced in theatre. This will be their BLT debut.”

Once the cast is selected, the preparations for the musical will begin toward the end of January.

Practices will be held three to four times a week on week nights and weekends up until the premiere performance. Set times and days for the practices have not been decided.

Waterloo said “Mary Poppins” was chosen as the spring performance based on the community’s reaction to previous musicals.

“We looked at different options and what our community responds to and enjoys,” she said. “We’ve learned that titles that are familiar to people are really the ones that become successful shows. ‘Mary Poppins’ is just such a magical story and it offers roles for children and adults.”

One of the aspects of the musical that stood out to the BLT board members was the fact that there were several roles for children.

“We like to focus on children’s roles,” Waterloo said. “We want to pass on the skills of theatre to the younger generation.”

With this production, BLT will also acquire new technology.

“One of our desires for this show was to have Mary Poppins fly,” Waterloo said. “We have hired a company out of California that will travel here to help install a grid system and train us to use it. The grid system will be a permanent fixture that will improve lighting, allow us to add a curtain and make Mary Poppins fly.”

A fun addition the theatre plans to incorporate into the show’s run is a character tea party.

“Following the first Sunday matinée show, with the help of the Lincoln County Les Belles, we will host a Mary Poppins character tea party,” Waterloo said. “People will be able to buy an upgraded ticket to the event, which will allow attendees to have tea, meet the cast and get their autographs.”

Waterloo said the theatre is looking forward to what 2017 will bring.

“This is a huge undertaking that we are excited to see through,” she said.

For more information about the “Mary Poppins” auditions, contact Waterloo at tickets@brookhavenlittletheatre.com. To purchase tickets to any of BLT’s shows or events, visit www.haventheatre.org.

Everyone agrees something needs to be done about the roads of Lincoln County. Those who oversee those roads in particular... read more