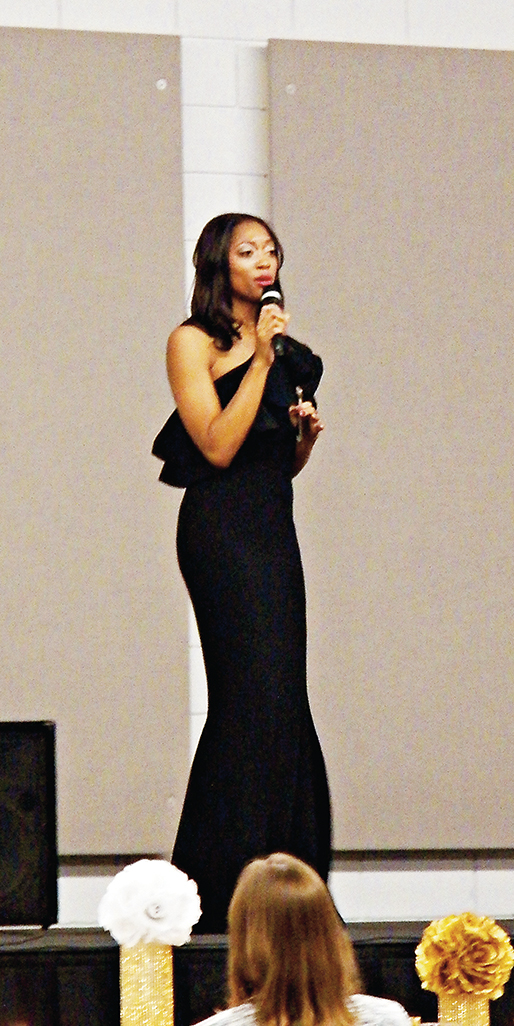 Photo submitted/Britney Clark speaks to an audience about her reason behind traveling to the village of Kasaali, to help others globally during her event, “An Evening Under the Stars,” earlier this month.

Wesson woman getting closer to fundraising goal to travel to Uganda

A Wesson woman hoping to teach mothers and daughters in Uganda a trade has raised a good bit of $7,500 she needs to make the , but she’s still $1,765 short.

Britney L. Clark, 25, a financial planner, raised most of the funds through community donations and participation in “An Evening Under the Stars,” an event she hosted earlier this month to showcase local talent.

Clark explained to those there that her goal was to raise money to continue building “The Glow Effect Centre for Women and Girls” in the village of Kasaali. She planned the festive night with catered food and entertainment, then sold tickets to raise money.

Since October, Clark has put in every effort to make sure she fulfills the goal of not only going to Kasaali, but making an impact to change their lives forever. She said she knows God has called her to impact people beyond her surroundings, “If you’re going to be a leader, the vision can’t be small,” she said.

Many questions have stirred up since she started her fundraising goal in October. Specifically, towards her going to Uganda, Kasaali, instead of helping those in need right in the community. However, Clark has been an ambassador and the leader of many community programs and she knows that God is calling her to go to the next level.

Clark has received a lot of positive support for her plans, but she’s encountered naysayers as well. “Some people were not supportive, but when you sign up to do things like this, those things are going to come,” she said.

Despite all the obstacles, she knows that this mission trip will give her more experience helping others.

This mission trip is only the beginning of the next chapter of service for Clark. “This is my calling; I won’t take my eyes off the goal until I get it,” she said.

Clark will be serving in Uganda, Kasaali, Jan. 13-25. Donations are accepted online at glowexchange.org/cause/britneyclark. Checks and money orders can also be mailed to Clark at The Glow Exchange, 4211 Laurel Canyon Blvd, Ste. 303, Los Angeles, CA 91604. Donations should be made out to Empowerment Works with “Britney Clark – TGX” written on the memo line.

A staple in the community has been holding it together through the holidays, but now needs to replenish supplies for... read more