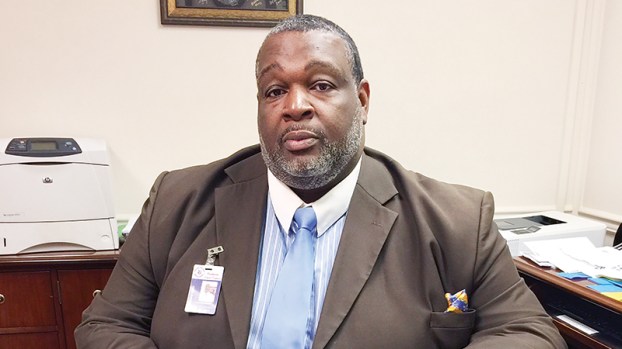 Photo submitted/Rod Henderson has been the deputy superintendent of the Brookhaven School District for two years.

Rod Henderson gets an A+ for service

Growing up with a police chief as a father and a school teacher as a mother might be tough for some, but it only drove Rod Henderson to push harder.

The son of Arlustra “Pap” and Ella Henderson, the Brookhaven native has seen success as a high school football coach and as deputy superintendent for the Brookhaven School District. He has no plans to stop serving others, he said.

If anyone had asked him what he would be doing today, he would have not guessed it would be following both of his parents’ footsteps in the Brookhaven community.

Henderson received his bachelor’s degree in criminal justice from Grambling State University, and he received his master’s and a specialist degree from Mississippi College in education leadership. He started in Brookhaven as a football coach, but he soon moved to Texas and became a spokesman for Drug Abuse Resistance Education, or D.A.R.E.

Henderson did not realize the effect he had on Brookhaven until he moved to Texas. His best friend, Daryle Morris, convinced him to think about moving back to Brookhaven to be a positive role model for younger people. Henderson promised to at least think about his friend’s request. He did not know that decision would change his life. Or that his friend’s life would end.

Morris did not live to see Henderson fulfill his promise, but a host of other community leaders like Patrick Hardy and Tucker Peavey did. “I came home for my best friend’s funeral and I was approached by Patrick Hardy who came up to me about a job to be on the coaching staff with Coach Peavey,” Henderson said.

He was unsure about any of this because he still had things going on in Texas, but the men were not taking “no” for an answer.

“Tucker came by the house while I was still in Brookhaven and we talked more about it. I thought about that conversation on the way back to Texas,” he said.  Soon after, he made his decision and “was on my way back to Brookhaven.”

Since moving back home in 2002, Henderson has continued to fulfill the promise he made to Morris to be a great leader.

He took the job Hardy offered him with Peavey and coached the Ole Brook Panthers to a state championship in 2004.

In 2007, he joined the staff at Alexander Junior High School. While serving as assistant principal, he saw the school raise its grade with the state from at-risk of failing to a successful school during the 2010-2011 school year.

Faith plays an important part in his life.

He remains active in the community by helping at his church, Mt. Wade M.B. Church, and he’s an active member of the Mu Pi Lambda graduate chapter of Alpha Phi Alpha Fraternity, Inc.

As deputy superintendent, his role in the community is deep.

Henderson’s ultimate goal is to secure a bright future for students. “With this job, I get to be out in the community more and talk to the parents about making sure their kids are at school and making sure the kids are doing good at school every single day. Then the academics will take of itself,” said Henderson.

Henderson knows that God wanted him back in Brookhaven to do what he is doing now. He reaches out to parents to encourage participation in their children’s education. “I look forward to all of us being on the same page and speaking the same language of success. We still have a long way to go, but we are working on them day by day… We’re trying to make sure we’re building a foundation that prepares the children for life after graduation,” Henderson said.

He does not regret coming home and he encourages younger leaders to do the same. “There’s no place like home and you can influence a lot of people right here,” he said.

Henderson and his wife Stephanie live in Brookhaven with their two sons, Roderick and Michael.

Artists, business leaders, musicians and residents rubbed familiar elbows back in May and told their stories to the Mississippi Museum... read more