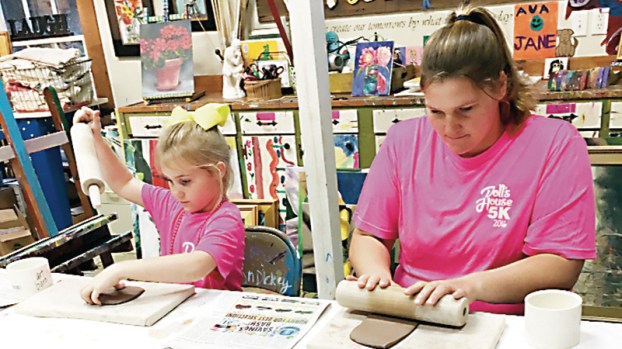 Photos submitted/Tayla Blount has been reunited with her daughter, Peyton Walker, who lives with her at the Doll’s House.

Doll’s House ‘Diamonds in the rough’ to graduate

Tayla Blount and Tiffany Clemmens are shining examples of what God’s grace can do.

The women, both residents at the Darlene Slater Rehabilitation Center for Women in Brookhaven, most commonly known as the Doll’s House, will soon receive their GEDs after months of hard work and study.

It was a long road for Blount, 26, and Clemmens, 23, who have both overcome drug addictions and run-ins with the law.

“It was not easy, but they are just diamonds in the rough,” said Doll’s House Executive Director Stephanie Turner. “God didn’t give up on me, so I couldn’t give up on them.”

Blount entered the Doll’s House July 17, 2014. After years of manipulating the system to get out of what she needed to do, she thought she would be able to do the same thing in the new environment. However, Turner quickly became a mother for her. “I had to make a choice, either get it right or fall back into my old habits,” Blount said.

After tough love from her new mother, Blount made better decisions that resulted in unforgettable moments in 2016. She started with a public profession of faith on March 20 at First Baptist Church in Brookhaven. She was baptized on that following Easter Sunday with her daughter, Peyton Walker, front and center. “It felt good for her to see me do something good,” Blount said.

Blount entered a hard life of drugs and more starting at age 11. She did not receive her high school diploma, but promised Turner that she would get her GED. She struggled for months to make that happen, and it did May 31.

“The whole GED and Co-Lin staff came to campus to tell me that I passed,” said Blount, smiling as she remembered the big moment.

Everyone was crying as they told Blount her test results.

“I did not know that they were coming to bring good news because I had been struggling to pass,” she said.

In August, Blount entered Co-Lin’s precision machining program. She also received full custody of her daughter on the same day. This year is also off to a great start for her as well as she prepares for her GED graduation ceremony Jan. 23.

Clemmens is also excited to be graduating. The 23-year-old has not stopped working since she came to the transitional home July 12, 2016. 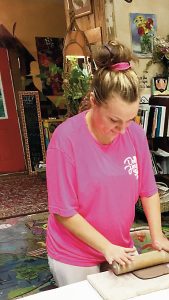 Tiffany Clemmens stays at the Doll’s House and will be receiving her GED from Copiah-Lincoln Community College Jan. 23.

Clemmens was not ready to deal with the world on her own because she knew she would be tempted to start her old life again, she said.

“I didn’t want to leave jail, so I stayed until they placed me in the Pearl River County drug court,” Clemmens said.

After working for a local court in town, she was moved to Doll’s House a few months later.

She impressed everyone by passing her GED test on her first try, even after not being in a classroom for almost eight years. She also started her first job in Brookhaven two months ago. She knows that none of this would have happened without Turner’s support. “She has made me stronger and built up my confidence so I could go to school,” Clemmens said.

After she graduates with Blount, she will enroll at Co-Lin as a freshman with hopes of majoring in psychology after she completes the general studies.

Both women are on the right paths of recovery thanks to their new mother who always had faith in them.

“This is manifestation of what God called us to do, there’s purpose in the pain,” Turner said.

Tension was apparent at the first meeting of the year of the Brookhaven Board of Aldermen as Ward 4 Alderman... read more