If you do the crime, you pay the time, but what happens after that?

Most jobs require background checks, which will show an individual’s criminal history. The chances of people getting a job with any kind of record are low, said Rev. Jerry Wilson, Lincoln County supervisor for District 1. Wilson is attempting to start a “working spiritual” program to give those with a felony conviction a second chance after they are released from jail.

“People need jobs. Attaching a felony to their situation will make it hard for them,” he said.

Wilson’s program would allow those who have committed felonies such as robbery, theft and other related crimes — except for murder — to participate in the program to expunge the conviction from their records before the job search begins.

Wilson believes that a landing a good job and reconnecting with Christ will help get people back on their feet to avoid the criminal life they were once a part of.

“My home was broken in before too, but people still need help. If people had jobs, they wouldn’t be doing that stuff,” he said.

Wilson is now in his fourth term as supervisor, and he has struggled to find out how to establish a program like this in Lincoln County.

“We just haven’t found the right people to really help, but I do know it’s someone out there,” he said. “If it’s in your heart to help people, you’ll do what it takes to get it done.”

A few people on Wilson’s team have committed their help once the program gets off the ground. Those include Justice Court Judge Roger Martin and Pastor David Franklin of Christ Church International, Wilson said. He said Martin will help on the legal side, while Franklin will assist in the spiritual element.

“Often times, the people who come out of the correctional institutions are so excited about freedom that they don’t make the decisions necessary to facilitate their souls being stabilized.  If I could get a man to listen to me, I can get a man stable in his life,” Franklin said.

Since the program is still in the idea stage, Wilson has helped inmates with the help of his wife, Ward 3 Alderman Mary Wilson, and his church, The Living Work Faith Ministry.

State law allows some convictions to be expunged. Those include a first offender misdemeanor, among others. Some felonies can be expunged, according to attorneys. 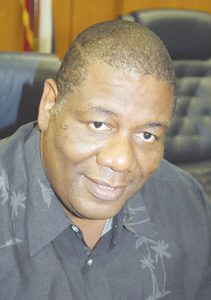