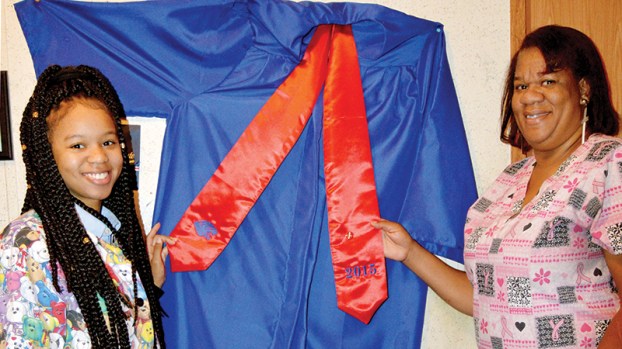 Photo by Orionna Brumfield/Marshanna Graham (left) and Golenia Graham have worked together to inspire each other.

Golenia Graham considers motherhood to be one of the greatest gifts in life.

The Brookhaven native has experienced that gift five times over with daughters Amanda, Ashley, Marshanna, Shan’toria and Ari’yana.

They’re all remarkable women in their own rights, but it was the one stuck smack dab in the middle who showed her mama how to really fight for what she wanted in life.

Golenia said Marshanna reminded her that she’d taught them to be tough, and she needed to find her strength and independence again.

“I was married for 25 years with five kids, and once I got a divorce, I never knew what life could be,” Golencia said. “I said, ‘Lord if you bless me to get a job and take care of my kids, I’ll do it’ and that’s just what he did.”

Marshanna, 19, has accomplished many things and her main goal is to come back to take care of her mother after she starts her nursing career.

“I always said I wanted to be a nurse when I was younger. One time I had an incident and mom was right there to take care of me. I knew that if she could do that for me, I could to do that for other people,” Marshanna said.

The mother and daughter are best friends, and they have both made each other proud along the way. “I love all my girls equally, but this one here has really bent over backwards. My baby went out and searched and got all the scholarships to go to the private school,” Golenia said.

Marshanna was very active during all four years at Brookhaven High School. She became a cadet major in JROTC while serving as senior maid on the homecoming court with her best friend, Imani Quinn. Graham was also a part of the Spanish club, color guard, National Honor Society, National Honor Society and Mississippi Scholars.

During the Mississippi Scholars banquet, she received a $2,000 scholarship for an essay she wrote describing her mother as her greatest inspiration. The rest of her scholarships she earned added $2,000 more and she was offered an $11,000 art and academic scholarship to go to Mississippi College.

Her biggest accomplishment yet has been passing her HESI 2 Assessment: Critical Thinking with an overall score of 83 on the first try, which qualified her for the Mississippi College Nursing Program.

Golenia has now received two associate degrees from Copiah-Lincoln Community College. It was not easy for her to earn either one, but she graduated with honors in May of 2016.

“I always told my girls to get out there and do the best you can. At the age of 46, I went back to college and got my AA in social work and I won’t let anything interfere with what I’m trying to do,” she said.

Golenia refuses to let any of her daughters down. Her two oldest daughters are doing well with their own families now, and the two younger daughters are always on the honor roll at school, just like their big sister Marshanna. The family believes that no condition should stop anyone from achieving their dreams, Golenia said.

“Growing up, I was considered a stereotype: the little black girl from the hood. People thought I was going to end up pregnant just because I had guys for friends and dressed like a tom boy,” Marshanna said. “For those who want to label you, prove them wrong. That right there should be your motivation. Life is what you make it so get out there and live your life.”

Lincoln County’s legislators are in their second week of a 90-day session in Jackson and one of the main items... read more