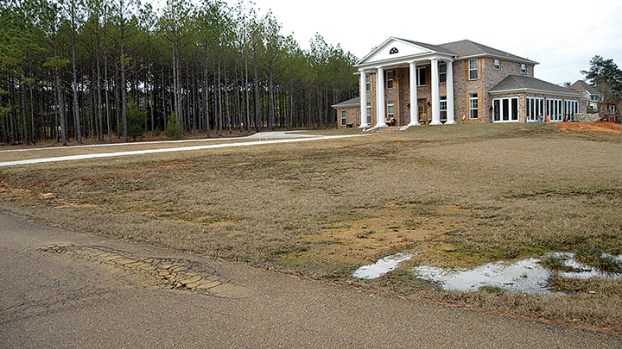 Photo by Orionna Brumfield/Oak Hill Estates residents are frustrated with the current conditions of their roads and they want them fixed by the city. But the Brookhaven aldermen say the city doesn’t own the roads.

It’s a fight that’s been going on since 2012 and most likely will continue until the gravel meets the road.

Residents of Oak Hill Estates met with the Brookhaven Board of Aldermen again Monday in a work session to discuss the ownership of the roads in their subdivision.

They met already on the same issue Dec. 15 but this time around Oak Hill Homeowners Association President Kevin Laird came armed with all 17 other homeowners and more evidence to back up the association’s claim that the city owns the roads and therefore should be responsible for the upkeep.

He asked for a written decision from the city.

All seven aldermen were present for the discussion; however, Ward 6 Alderman David Phillips recused himself for personal reasons because his brother and business partner lives in Oak Hill.

Laird produced a 2012 warranty deed and reminded the board that the association had talked with Ward 4 Alderman Shirley Estes on May 6 of that year about the water, sewage and road maintenance plan relative to annexation. Laird said they also spoke with Alderman-at-Large Karen Sullivan about the issue. Sullivan did not address the statement Monday night.

Laird said the homeowners unanimously agreed that year to move forward with a request to have the Oak Hill Estates developers deed their street to the City of Brookhaven on May 6, 2012. Laird said the warranty deed was recorded as an official document with Lincoln County Chancery Court and the completed warranty deed was also returned to the office of their preparing attorney Ralph L. Peeples on June 8, 2012.

In the previous work session, it was brought out that according to the minutes of 2012, the board never accepted the warranty deed. That confuses the issue more, because Laird said the city paved a third of a mile of the Oak Hill road after June 8, 2012. “They committed they would do this once the roads were deeded over to the city,” Laird said.

Aldermen have said the board didn’t know the roads were private at the time.

The issue began, city attorney Joe Fernald said, when the developers of Oak Hill Estates did not dedicate the roads — Oak Hill Drive and Corner Stone Lane — to the county during the subdivisions  construction.

Determining if the roads are up to standard will require a bore test by an engineering firm, which will be at the association’s expense. If the roads are not up to city standards, the homeowners will have to pay for them to be fixed before the city could take ownership, Fernald said previously.

Homeowner Beck Warren is one of many of the frustrated residents in Oak Hill. He requested a copy of all the 2012 minutes during the meeting.

“This matter was discussed with Mrs. Estes, and Mrs. Sullivan allocated money for this project out of the alderman-at-large money,” he said. “The city was under the county so this notion that the board didn’t know it was private before they came in and spent $30,000 paving the road at Oak Hill continues to be a mystery. We had multiple discussions with that administration and him [then-Mayor Les Bumgarner] about it.”

Warren said Estes has fought for them as much as she could.

“I want to personally apologize to Mrs. Estes for standing up for us the whole time. She’s been singled out as misstepping here but she’s just representing her constituents,” Warren said. “Everything has been in place and we followed her direction and the direction of the previous board. Mr. Fernald should’ve known that they were paving a private road and spending taxpayers’ money. If that happened, then the law has been broken and we have a bigger issue here.

Walmart has made it a little bit easier for Brookhaven Elementary School students to take their state tests. BES recently... read more