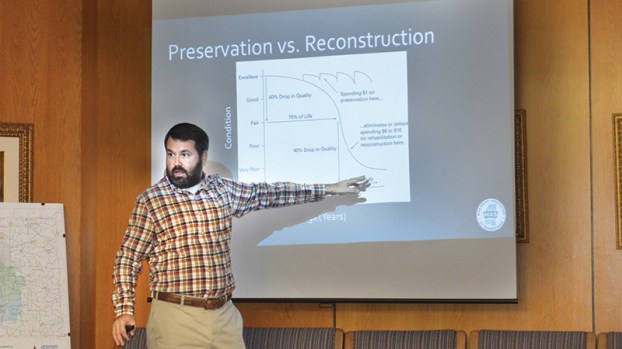 Photo by Orionna Brumfield/County engineer Ryan Holmes presents a report to the Board of Supervisors about infrastructure funding Monday.

Without enough money available to repair and maintain Lincoln County roads and bridges, the Board of Supervisors can either push for a gas tax increase or raise ad valorem taxes.  They would prefer to see the gas tax increase.

“Your constituents probably judge you on two things: How much taxes they pay and how good their roads are,” he said.

And if this is true, many taxpayers are not happy.

Holmes is in favor of an increased gas tax to fund road and bridge repair and maintenance. Several supervisors agreed with him.

“The people that are destroying the roads are the people that’s riding on them,” Holmes said. “It’s kind of hard to find another way to pay for them without it coming out of gas taxes. At the end of the day, you can choose to travel less if it hurts you financially.”

“We only got two sources to get money, the fuel tax and the ad valorem tax… that’s it,” District 5 Supervisor Doug Falvey said.

“The gas tax is a users’ fee. In other words, if you use the road, you pay the taxes just like sales taxes. You buy the products, you pay for them,” District 4 Supervisor Eddie Brown said.

The county is responsible for about 1,100 miles of roads and about 300 bridges, Holmes said. “We’re in the top five in roads and bridges that we have to keep up and the 20s in assessed value. Basically, we have more to maintain with less money,” he said.

Funds to maintain roads and bridges haven’t kept pace with inflation, according to the report.

Members of the state Legislature are also discussing the need for bridge and road repairs during their 90-day session, which is underway.

Rep. Becky Currie, R-Brookhaven, said roads and bridges are high on the list of importance but a gas tax increase isn’t likely to happen.

“There is no appetite in the House for a gas tax but we are looking at the BP money that the state is getting to put a big chunk of that to help get our bridges and roads fixed,” she said.

Coast lawmakers plan to fight to keep that money on the Coast.

“I know our highways and bridges need attention,” said Rep. Vince Mangold, R-Brookhaven. “I’ve actually toured our district and seen first hand some good and bad spots. I’ve heard it said numerous times ‘Our roads and bridges are the welcome mat to our state.’ The big question is, how we fund the work?

“I’ve heard several ideas passed around and we’ll have to work through them and see what works best for our people. Some are also wanting to wait and see what comes down from Washington under the new administration since it was big on President-elect Trump’s list.”

Supervisors across the state have pushed for an increase in the fuel tax before, and lawmakers have largely ignored those requests.