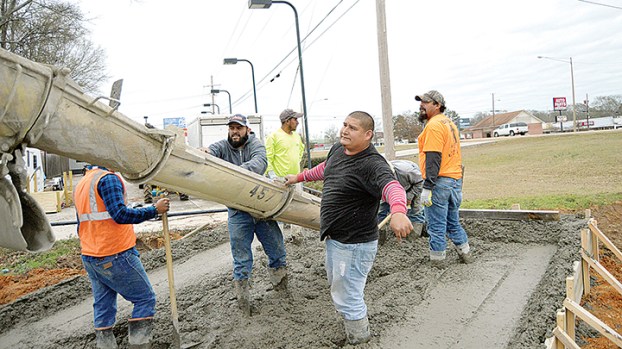 Photo Orionna Brumfield/Contractors pour concrete recently for the parking area of what will be Jeff Wilson Chrysler Dodge Jeep Ram Fiat, which should be completed in March. Brookhaven, a city of about 12,500 people, is home to more than a dozen auto sellers, with six dealerships specializing in the sale of new vehicles.

Car buyers looking for a bang for their buck find all roads lead to Brookhaven.

Area auto dealers say it’s the great location and their customer service that brings shoppers to Lincoln County for vehicle purchases. And those shoppers already living here don’t have to travel far for good deals.

“People from Brookhaven and surrounding areas come here for the wide selection available and lack of franchises in neighboring counties and towns,” said Lavelle Sullivan of Sullivan Ford.

Brookhaven, with a total population of about 12,500 people, is home to more than a dozen auto sellers, with six dealerships specializing in the sale of new vehicles. They’re mostly scattered along Brookway Boulevard and Hwy. 51, and all near I-55, which makes it convenient for shoppers traveling from outside the area.

Garrick Combs, executive director of the Brookhaven-Lincoln County Chamber of Commerce, remembers car shopping with his mom and dad when he was younger.

“Growing up in western Franklin County as a child, my parents drove to Brookhaven to buy all of their vehicles. The rest of my family and friends did the same,” he said.

Some of those profits go back into the facilities to benefit the customers and into the community that directly supports them.

“We have some of the best car dealers in the country who have invested millions of dollars in their facilities, which gives the people of Brookhaven and Southwest Mississippi an all-star line up of the finest facilities not only in our state, but in this country,” Mike Whatley of Mike Whatley Honda said. “Our dealers are private owners with local interests that give back generously to our community, not large corporations that take your money out of our state.”

Whatley, who was president of the Chamber of Commerce in 2016 and remains on the executive board, recently remodeled Mike Whatley Honda.

“We are extremely proud of our new state-of-the-art facilities and our technology upgrades that enable us to give our customers the experience they deserve when purchasing a new or used car from Mike Whatley Honda,” he said.

Toyota of Brookhaven improved its facilities as well.

“We tore down a bunch of walls and have it where people can fill very well connected with all offices. When someone comes here, it’s open and they can easily go to every office. Everyone is available to everyone. We’re out here for everybody,” said Prentiss Smith, Toyota of Brookhaven general manager.

Jeff Wilson Chrysler Dodge Jeep Ram Fiat has a shell of a building up and has poured the concrete at the new dealership going up at the corner of Hwy. 51 and Brookway Boulevard.

Jeff Wilson expects the new facility at 109 Hwy. 51 North to open by March. “Our current location was important to secure that the franchise reopened in time and allowed us to get established and plan for the new facility,” Wilson said. “With the addition of the Fiat franchise I knew that we needed to upgrade the size and location to better serve our customer base. With all the new technology and advancement in automobiles, it just needed to be done. The new facility will include the new branding elements required by Chrysler and the latest equipment.”

The daily goal of putting the customers first and even investing in more innovative equipment is what sets the Brookhaven car dealerships apart. Many dealerships have been lauded for their great service locally as well as nationally.

“We are honored to bea multi-year/multi-category winner of The Daily Leader’s Reader’s Choice Awards,” said Paul Barnett of Paul Barnett

Barnett has also been recognized as one of Nissan’s elite, winning the 2016 Owners First Award Of Excellence Dealer award.

Mike Whatley Honda received the Honda President’s Award for 2015 and has hopes for receiving it again for 2016. “This award is given to recognize the top 10 percent of Honda dealers that are doing it right in the country,” Whatley said. “We are anxiously awaiting the results.”

Whatley is also a nominee for the 2017 Time Dealer of the Year, nominated by the Mississippi Automobile Dealers Association to represent the state.

“I will be one of 49 dealers competing for the title,” he said. “ Yes, Brookhaven is representing on the national stage. I am humbled and honored to be a part of such a prestigious award.”

Whatley and his family as well as his management team will be in New Orleans soon as the National Automobile Dealer Association convenes for its 100th anniversary convention.

Toyota of Brookhaven was recently named Business of the Month by the Chamber of Commerce.

Dealers said they expect the industry to continue to grow in Brookhaven.

“The investment in a new facility and technology proves our commitment to our community,” Wilson said. “We will be increasing our inventory levels by around 40 percent in the next couple of months in both new and used vehicles. Our ability to have the right product at the right price and the right service will be a major decision factor for our customers moving forward.”

“The growth in dealerships also allows for more job opportunities in the industry. “As our business grows, we’re going to need more help, and we’ll be hiring more people,” Smith said. “I want to make this place to be as great as it can be.”