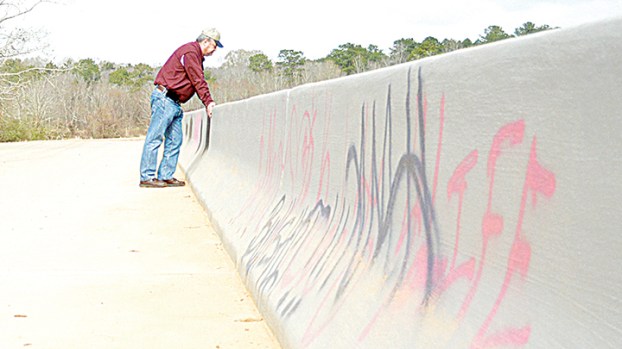 Photo by Orionna Brumfield/District 4 Supervisor Eddie Brown has repainted Big Creek Bridge four times. It’s covered again in spray-painted scrawls and messages, many unfit for print in the newspaper or on concrete. Lincoln County Supervisors are asking for the public’s help to stop vandals from defacing county property and stealing and damaging street signs.

A can of spray paint is cheap. A baseball bat is a staple in most crowded garages and hall closets.

But the damage each can do to bridges and road signs in Lincoln County plays havoc on the road and bridge fund that is already stretched to pay for repairs to roads and bridges.

It’s about $200 to replace a street sign. Painting over graffiti costs $500 or more.

Supervisors have complained at their board meetings about the problem.

District 4 Supervisor Eddie Brown has repainted Big Creek Bridge four times. It’s covered again in spray-painted scrawls and messages, many unfit for print in the newspaper or on concrete.

It is a crime to spray paint or damage bridges and people could face fines or possibly even jail time if charges are filed.

“We investigate all complaints dealing with vandalism to bridges or roads,” Sheriff Steve Rushing said. “In the past year, we have had two to three calls from supervisors, located the suspects and turned it over to the supervisor who has to file charges since it is county property. These were juveniles who usually were required to clean or repaint over the damage.”

The issue is a headache for the supervisors. “We could be moving forward with other road necessities,” Brown said. “We’ve put up over 100 road signs in the districts already.”

Missing road signs is an inconvenience for delivery drivers and visitors to the area. But it can be serious in an emergency. Road signs are a necessity, especially in the rural areas of the county where cell signals for GPS can be weak or non-existent.

Supervisors must dig into their road budget to fix damage caused by vandals. That’s money that doesn’t go to smoothing out roads. “The $500 to $700 we use to paint a bridge is the cost of a load of hot mix we use to cover a whole bunch of rough spots on a road,” Brown said.

Supervisors are asking residents to keep an eye out for the ones committing the crimes. “If the people would report the tag numbers to the sheriff’s office that would help,” Brown said. “Parents and grandparents should also talk to their kids about this. No one wants to see anyone going to jail.”

Anyone with information about a crime is asked to call Lincoln County Sheriff’s Office at 601-833-5251.

Retirement is a time for many to relax. For others, it is a time to get out and socialize. Retirees... read more