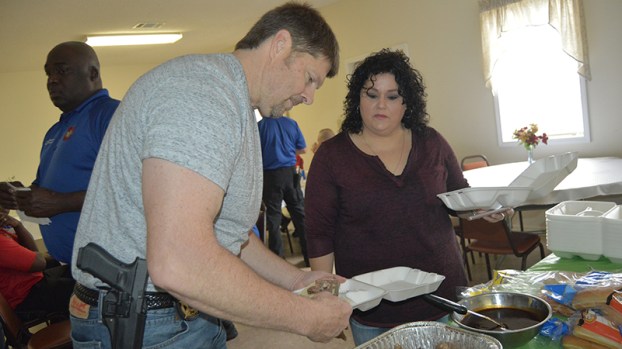 Calvin Carter and Hardy Thrasher served together as deacons at Beulah Chapel Missionary Baptist Church and died just two and a half weeks apart, leaving behind a legacy of good works church members try to duplicate even now three years later.

To honor the service of Carter and Thrasher, Beulah Chapel hosted an appreciation lunch Monday for first responders from the Lincoln County Sheriff’s Office, the Brookhaven Police Department and area fire departments.

Church members agreed the two deacons would have been the first in line, not to eat, but to serve those wearing the uniforms.

“Both men were two very inspiring deacons here at our church,” said Charles Caston, senior pastor at Beulah Chapel. “We all came together to do this for two men that loved Jesus, loved the church and loved the people.

“We wanted to help motivate, not only people in our church, but motivate people in the community to break down barriers that do not need to exist anymore.”

Carter and Thrasher tried to serve God every day and lead others to do the same.

“They followed the Lord’s rules for doing his work,” said church member Maxine Battles. “By displaying these characteristics they gained respect from others.”

Carter opened the church doors each Sunday, taught Sunday School and was the financial secretary for Beulah Chapel.

Their leadership inspired other men as well, especially Carter’s nephew Arlandus Brown, who wants to follow in his uncle’s footsteps.

“If I can be half the man he was, I’d be great here,” Brown said. “I want to have a relationship with everybody in the church where they can come to me and talk to me about anything because that was the type of man my uncle was.”

Blood couldn’t have made Thrasher any closer to his daughter-in-law, Linda. He accepted her immediately as one of his own when she married his son, Jessie.

“He was very Christian and everybody in the church loved him because he got along with everybody,” she said. “I can’t say enough about how great he was in my life. He was like my father and always wanted me to call him Pops.”

Both men glorified God every day. Their commitment to Christ has inspired others to do more in the church. Carter’s wife, Barbara, is one of the many active members at Beulah Chapel. “She’s really strong in the church and loves the Lord as Calvin did,” Caston said.

Bernetta Character loves to see young people lining the streets of Brookhaven to honor a man she’s respected for most... read more