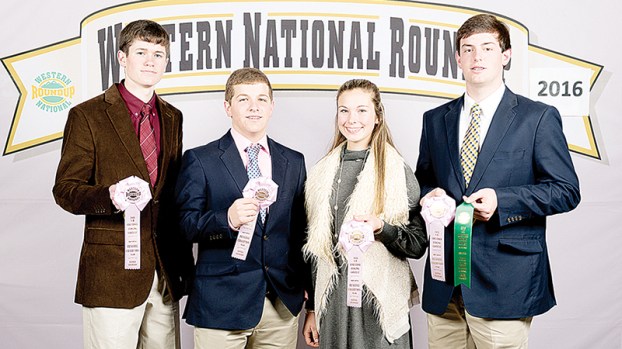 That’s higher than any Mississippi team in the history of the national contest.

The team won its ticket to Denver, Colorado, after winning the state level competition held at the Mississippi State University horse park in Starkville in May.

Livestock judging consists of two components: placing a group of four animals and orally justifying the decision. Each member of the team has a limited amount of time to analyze a class of animals and place them. The student compares the animals in the class to each other, but also to the ideal animal in that species.

After placing each class, the student must verbally justify their final placing. Relying on their memory of the class, team members present their analyses for each animal to livestock judging experts.

At the national contest, the team placed 12 classes of livestock and spoke six sets of oral reasons. Classes were made up of cattle, swine, goats and lambs.

The Mississippi team placed second in cattle, 15th in swine, 15th in goats, 10th in lambs and 11th in reasons.

“It took a lot of focus for these kids to get through the contest,” she said. “It took even more commitment for them to prepare for it.”

The team has practiced once a week since May, Williams said.

“They worked on all species just to make sure they had a well-rounded knowledge of them all,” she said. “They also made farm visits to look at different types of animals. They traveled to a competition in Indiana to practice. We took two days prior to the competition to visit farms and look at the quality of animals in Denver.”

Williams said it takes a lot of commitment and determination to stick with something like her team has for such a long period of time.

“They worked hard all year long because they wanted to be successful,” she said. “They wanted to represent Mississippi well, and they did. They placed better than anyone from Mississippi has in the history of this contest.”

After finishing with a big win, all four hope to continue judging, whether it’s in college or with the Lincoln County 4-H, Williams said.

Many people in the community were not aware of the boil-water notice until five or six days into it, Ward... read more