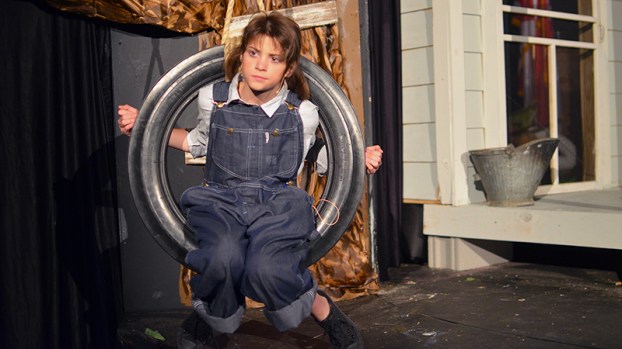 Photo submitted/Cadence Laird’s biggest role has been as the outspoken Scout Finch in “To Kill a Mockingbird,” at Brookhaven Little Theatre.

Bright Future: 12-year-old California has Hollywood on her mind

Becoming a famous actress in Hollywood is a big dream for some, but one Enterprise 12-year-old is working hard now to make her dreams a reality.

Cadence “California” Laird moved to the Lincoln County area two years ago with her parents, Randi and Mike Laird and sisters, Amelia and Maddie.

She got the nickname California when she started her first drama camp at the Brookhaven Little Theatre. “Two of the girls could not remember her name, so they started calling her California. They said she looked like she was from there and that name fit her,” her mom, Randi said. “Before long, everyone at the theatre was calling her that. Most people do not even know her real name.”

Laird never thought she be an actress, although  she loved watching Disney movies and musicals like “Hairspray” with her younger sisters. They memorized the lines and songs to their favorite movies for fun.

She got into the acting world at age 10 as extra in the musical, “Annie.”

“Although I was only an extra, I still had a lot of fun singing and dancing in ‘Annie,’” Laird said.

She went to her first drama camp the same year at Brookhaven Little Theatre and played Katrina Crane in “The Legend of Sleepy Hollow.” She was also a part of BLT’s young directors project, which was directed by the girls who nicknamed her California, MaryRhea Waterloo and Gracie Gray. The project started last year with their first play, “A Funny Thing Happened On the Way To Fifth Period.”

Her acting credits continued to grow with her roles in “Hansel and Gretel” and in her latest role as Scout, the young girl who asks tough questions in “To Kill a Mockingbird,” a play based on the novel by the late Harper Lee.

She worked hard to win that role after her family encouraged her to audition for it.

She’s great at memorizing lines and since Scout is in almost every scene, there were a lot of them.

“I listened to a recording of the lines in my room and just memorized them by saying them over and over again,” she said. “We did scenes dozens of times.”

Her family and friends came to support her in the play, and they showered her with praise and positive feedback. “I have friends at school who encourage me to follow my dreams because they think it’s really cool,” she said. “The classes came to see me in ‘To Kill a Mockingbird’ and told me that I did really well. It was a big confidence boost.”

The sixth-grader likes to color and read, while maintaining her good grades.

She hopes to attend Mississippi School of the Arts in Brookhaven “A lot of older kids from Brookhaven Little Theatre have gone there and they’re all good at dancing, singing and acting. I know going there can help me,” she said.

In the meantime, she plans to continue acting in the local theatre as well as branching out to the Jackson stage.

Friends may tell her to “break a leg” before a production, but even that wouldn’t keep the youngster from her dreams of acting in Hollywood. She could be the next Scarlett Johansson or Emma Watson. “I always liked action movies like ‘The Avengers’ and Harry Potter movies,” she said.

The actress understands that many people have dreams like hers, but she has the support of her family and friends to keep her going.

“If you really love it, you should go do it and work hard because there’s a lot of people who want to do the same thing as you, but if keep going it’ll be fun,” she said. “If it wasn’t for my family, friends and directors encouraging me, I probably wouldn’t have continued acting and be where I am now.”