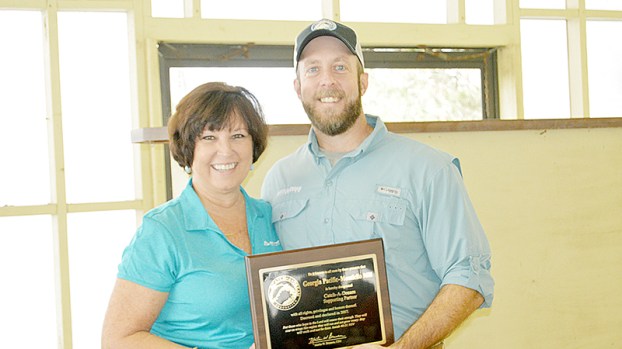 Photo by Orionna Brumfield /Brian Chisholm, operations manager for the Catch-A-Dream Foundation, congratulates Sheila McFadden, of Brookhaven, for her service since the program started in 2000.

Residents of Brookhaven and surrounding areas join hands every year to make a child’s dream come true with the Catch-A-Dream Foundation.

Since 2000, the Catch-A-Dream Foundation has partnered with Georgia Pacific Monticello to grant wishes geared toward hunting and fishing for children ages 18 years or younger with life-threatening illnesses.

The vision started in Brookhaven through noted Mississippi outdoorsman, author and sculptor, the late Bruce Brady. He envisioned the Catch-A-Dream program after the Make-A-Wish Foundation established a policy that it wouldn’t grant a child a wish that involved hunting or the use of guns, bows and other hunting or sport-shooting equipment.

Ronald Wojcik, who oversees the Monticello GP system, has been involved from the beginning with the first hunt. “I used to work with the Mississippi Fish and Game group and managed the deer hunt on the property,” he said. “We used to do employee hunts [at the pavilion]. When we were approached by Catch-A-Dream Foundation, we started doing hunts [for them] every year.”

Brookhaven resident Sheila McFadden finished her last Catch-A-Dream hunt as a GP employee, but she plans to come back and help as a volunteer next year.

GP Monticello has supported the Catch-A-Dream Foundation every year. Their partnership provides the children and their families the opportunity to stay on site and hunt or fish on 1,600 acres of the 2,200-acre Monticello property.

Doug Hoy, who works with GP public affairs and communications, is another Brookhaven resident who has helped with the Catch-A-Dream Foundation since the beginning.

“It’s just a great organization to work with. It feels good to provide an opportunity for others,” Hoy said. “It’s a point of pride at this mill and people are really excited and happy to afford someone that opportunity.”

Every year, candidates list their top three hunting or fishing activities. The Catch-A-Dream team selects a recipient based on that person’s physician approval, family size, time of year, hunting season and medical urgency to complete the activity.

This year’s recipient was 17-year-old Mackenzie Wallace. The left side of his heart failed him at birth, so he got a donor’s heart when he was almost 3.

Wallace and his stepdad, Byron Moser, traveled to Monticello from New Hampshire.

“The biggest factor is a suppressed immune system. We have to be very diligent just to make sure he doesn’t pick up something because it has a stronger effect,” Moser said. “A common cold for us could put him in the hospital.”

Moser introduced his stepson to the love of hunting. “I grew up shooting and when I met his mother, Cynthia Moser, in 2006, I taught him how to shoot,” he said.

Wallace applied for the program as applicant number 1650. Upon the completion of the program, Catch-A-Dream retires the recipient’s number with a plague acknowledging him as a junior partner. Wallace was promoted Saturday by Catch-A-Dream operations manager Brian Chisholm during the annual luncheon.

“This experience has brought me happiness and joy, which is something that I couldn’t get back at home because things are so busy,” Wallace said.

Chisholm is another GP employee who takes pride in changing children’s lives. He also presented Wallace with a hunter’s Bible, knife, blanket and book for his stepdad during the luncheon.

“You meet with a handshake and depart with a hug,” Chisholm said. “You start as friends and leave as family… and it just grows from there.”

Woman injured in hit and run on MLK

Brookhaven police are looking for the driver of a car who hit a pedestrian in the street Saturday and kept... read more