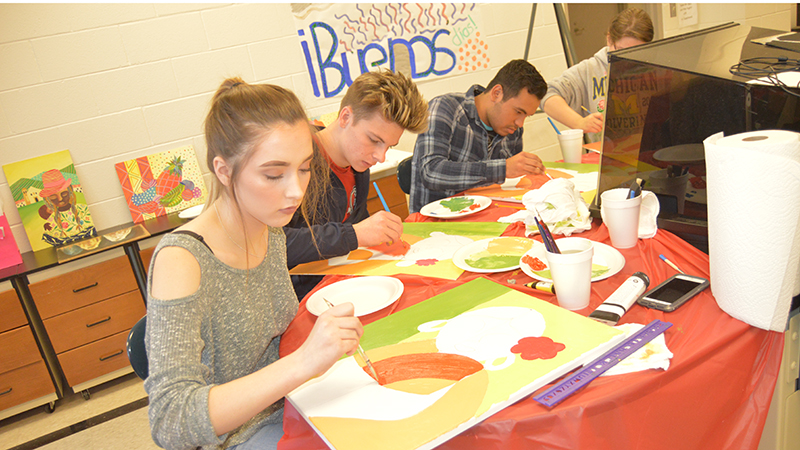 The science lab was a hub of activity Tuesday as students mixed iron oxide and titanium dioxide for their lesson.

And even though they timidly mixed the red and white paints together to create masterpieces on canvas, they’re not art students either.

They were there in that science lab filled with art supplies to learn Spanish by painting.

Brookhaven native Josh Brister and his wife, Lucia Duque Brister, visited his alma mater Tuesday and encouraged the students to express themselves through painting.

The couple’s home is in Madrid, where Brister moved six years ago. They married in July.

“The most important thing is don’t be afraid,” she said. “I doesn’t matter how good you are as long as you’re having fun.”

She led them through the steps to recreate a simple portrait of a Spanish woman while playing with various hues and shading, turning a pencil drawing into a colorful work of art.

Brister taught the class to say “mas despacio” if his wife moved to fast.

She spoke to the students in her native Spanish language, which challenged them to listen carefully to follow her directions. Brister translated for the class.

Lucia Brister dreamed of being an artist when she was 5 and now does exhibitions all over Europe and Spain. “I get to be an artist full time,” she said. “If you have a dream, go after it because you can do it.”

Josh Brister, a Panther from the Class of 2003, is a musician who tours Europe and the United State with his band, Burt Byler and the Bearded Souls.

The couple often work together, mingling art and music like notes on a stanza, or pastels on a palette. They brought their talents to  Ole Brook students at the urging of Brister’s mom, Debbie Brister.

“I loved working with the kids,” Lucia Brister said in Spanish. “They were a lot better than we thought they would be. In the little time we had, we finished a lot.”

The Bristers will be in Mississippi through Feb. 28 as they tour with the band, stopping in Jackson and Hattiesburg for shows. To view Lucia Brister’s work, visit luciaduque.com. To listen to Josh Brister’s music, visit joshbristermusic.com.