When a group of talented speakers come together to compete nationally, they all have one goal: to motivate the audience.

However, 17-year-old Davion Brown, of Brookhaven, was different. His goal for the prepared public speaking contest in Denver, Colorado, was beyond motivating the audience and judges; he wanted to touch their lives.

Out of 13 participants, he was the last to go, which meant he had to wait an hour since everyone had six to eight minutes to give their speeches. “You don’t know what everyone else is saying,” Brown said. “I sat there trying to go over my message, but I couldn’t help but wonder if they were doing better than me.”

All of those nerves went away once Brown took the stage. By the end of his speech, people were crying.

“He did an amazing job,” Jennifer Williams, MSU Extension Agent, said. “He kept a calm and steady tone throughout his whole speech.”

Brown chose to do a speech on purpose. He admitted that God has shown him his and it’s imperative for everyone else to find theirs. His team of volunteers, Mt. Wade leaders Countess Thompson, Jerry Rice and Dr. P. Randolph Hamilton Sr., helped him prepare for the speech.

This is the same topic the Brookhaven High School senior delivered when he won first place at Mississippi State University’s Club Congress competition. However, he added a more personal touch in Colorado.

Brown wants to be a funeral director, but the road to becoming that has not been easy. “I had to be terminated immediately from working at the funeral home,” Brown said. “It really touched me that someone, a whistle blower, decided to say that I was too young to work at a funeral home.”

He used that as his encouragement to do better. “I told myself that I wouldn’t let anyone stop me from doing what I am here to do which is my purpose,” he said. “That encouraged me while I was speaking and I believe it encouraged everyone else in the audience. You’re going to have nay-sayers to discourage you, but you have to let their discouragement be your encouragement.”

He left his MSU extension agent with goosebumps. She had a great feeling that he was going to place high in the competition.

“In today’s youth a lot of people don’t know their purpose,” Williams said. “The fact that he knows his purpose and what he wants to do in his life is so amazing.”

Brown has been inspiring others since he was young, and it all started with church.

“I always loved church,” Brown said. “I would come home afterwards and imitate everything the preacher said.”

“Over the past year, I’ve been preaching the word of God at various churches and I feel like that is a part of my motivational speaking,” Brown said.

The senior is also an honor student and Mr. BHS.

His ultimate goal is to continue influencing others, especially his peers, to live the right way.

“With me previously working at a funeral home, the one thing I see more is young people coming in. When you see them come in, you don’t know if they gave their life to Christ or not,” he said. “That is the thing that I want the young people to realize, you don’t have to be old to die. You never know when your time is up, and you need to know before you leave this earth if you’re saved and a follower of Jesus.”

The minister plans to attend Mississippi College for business studies after he graduates Brookhaven High School in May. 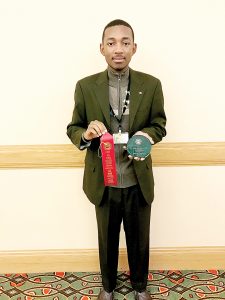 Faith Presbyterian Church is on a mission to spread the gospel around the world. The Brookhaven church will wrap up... read more