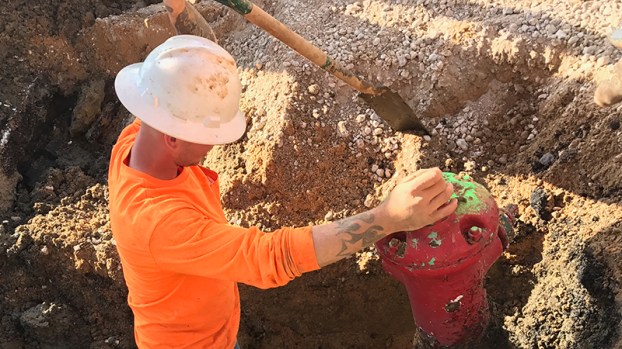 You Asked: Hydrants being replaced in city

Q: What is the city doing to the fire hydrants?

A: New, shiny red fire hydrants are being installed in downtown Brookhaven.

For the last three years, the Brookhaven Water and Sewer department has budgeted $100,000 a year to replace old fire hydrants in the city.

“To change fire hydrants out downtown is ranging around $16,000,” said water and sewer Superintendent of Brookhaven Keith Lewis.

In 2016, the department replaced hydrants on Ole Brook Road, Washington Street, South Second Street and the surrounding areas. In 2015, they changed a lot of hydrants on Brookway Boulevard, Lewis said. Each hydrant costs about $1,300.

Lewis said the project is needed because it’s difficult to find replacement parts for the older hydrants.

“If you get a Muller brand, you can get a part for them no matter how old they are, but a lot of these old fire hydrants are not the Muller brand,” he said.

The new replacements will also help with lower insurance premiums for city residents.

The Brookhaven Fire Department flushes the hydrants twice a year.

“If one is not working, they give the water department a list of what’s not working and we fix them,” Lewis said.

There are about 700 hydrants in Brookhaven. They have replaced the hydrants for this year, but they’ll have more on the list for 2018, Lewis said.