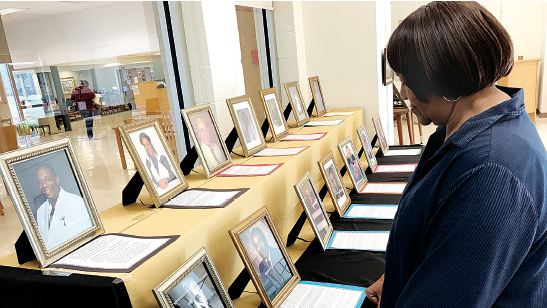 Photo by Orionna Brumfield/Maxine Allen shares the stories of Brookhaven African-American leaders like Archie Alphonso Alexander and Jesse Buie, who were both principals at Alexander High School.

“I was sitting at home one night and I recognized the first black leaders in Brookhaven,” Allen said. “They had Irvin Roberson and several more people.”

Roberson became the first black police officer for the city of Brookhaven in 1964. He retired as captain in 1994 after 30 years of service.

He served as the bailiff for the Lincoln County court system for 11 years after he retired from the Brookhaven Police Department. He was honored as The Daily Leader’s Citizen of the Year in 2007.

Allen, who’s worked for the library for over 25 years, started her showcase with the people she saw in the paper at the front of the library in 2010.

After receiving so much feedback, her exhibit was moved to the meeting room at the library. Growing numbers of portraits and biographies of African-American leaders fill the room with rich history every February.

The newest additions include District 1 Supervisor Rev. Jerry Wilson and Ward 3 Alderman Mary Wilson. The husband and wife elected officials are both the first blacks in their positions.

Everyone in the exhibit is either a native of Brookhaven or lived in the city. Allen spent time visiting the people or their families to get all of the information.

“I called them up, and if they were deceased, I talked to their family,” she said. “Everybody gave me permission to use the information.”

She stayed at most family homes for hours gathering information while hand writing all of the notes to give to her daughter, Jennifer Allen Stenson, who writes all of the biographies.

“Jennifer does beautiful writing,” Allen said. “Her fifth-grade teacher told me to make sure she keeps up her writing.”

Allen enjoyed meeting everyone to get their stories. “I received so much information from some of them that I could write a book if I wanted to,” she said, laughing.

Some of the books she could have written included the life of her former principal, Jesse Buie.

Buie was the first African-American to graduate from Alexander High School and returned to be principal for 19 years. He was also inducted into the Alexander High Legacy Hall of Honor in 2006.

“I really enjoyed sitting and talking with his wife,” she said. “Getting a chance to visit and talk with people is the best part about this.”

The Black History Month reception will be Saturday at the Lincoln County Library starting at 2 p.m.

Thumbs up or thumbs down, we weigh in

There’s more legislative action happening in Jackson than most of us can keep up with — thousands of bills are... read more