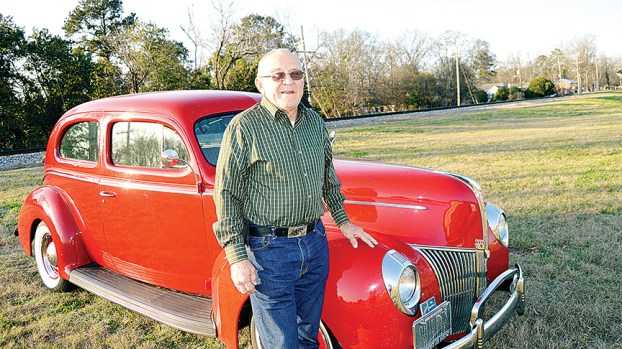 Photo by Orionna Brumfield/Ole Brook Cruisers President Thomas Smith — who’s not related co-Cruiser T-Tommy Smith — won’t be eligible to enter his ruby red ‘40 Ford into the Goin’ to Town Car Show in March. The show has become so popular members of the Cruisers aren't eligible to enter. Still, Smith is helping organize the Brookhaven show.

T-Tommy Smith believes that every car has a story.

The automobile enthusiast has enjoyed everything about cars since he was young, especially traveling in them.

He organized his first car show 39 years ago with the Ole Brook Cruisers. The shows were held at motels and car dealerships until the Brookhaven-Lincoln County Chamber of Commerce started to help a few years ago.

Smith said the Chamber offered to bring the show downtown, which is when he created the name “Goin’ To Town Car Show.” It will be held March 4 in downtown Brookhaven. The Chamber is helping Smith promote the event.

The show has become popular over the years, attracting car owners from all over the country, he said. Smith travels to many shows with his group to promote the Brookhaven event nationwide.  This year’s selection of cars will come from Mississippi, Alabama, Florida, Louisiana, Tennessee and Arkansas.

The first car show started with only 15 cars from the local area, but the popularity has grown so much, organizers only have room to showcase other people’s cars — members of the group don’t enter.

“This show is for everybody else, not us,” Smith said.

Cars will be set up along Railroad Avenue from The Inez south to Brookhaven Glass Co. on East Chickasaw Street.

Both sides of Railroad Park will be used this year as well.The Brookhaven Board of Aldermen approved the additional space request in late January.

There will also be more community participation this year. “Brookhaven Fire Department is bringing their fire truck and will demonstrate the Jaws of Life,” he said. “Mississippi Highway Patrol will also come and do the seat belt rollover demonstration.”

Smith will present dozens of awards in categories like Top 25, Sweet 16 and the Fielder’s Pro Shop Sponsorship plague. Participants, merchants and club members will vote in the categories. Winners will be announced by 3 p.m.

The free event is open to the public.

One florist at Shipp’s Flowers puts a little bit of “Heather” in every bouquet. That’s because Heather Bonds has been... read more