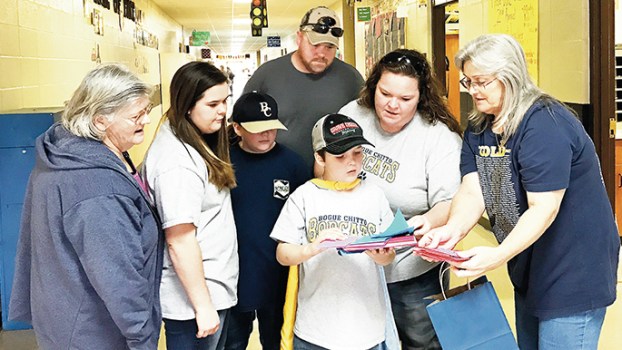 Valentine’s Day was filled with Bogue Chitto Elementary School students dressed in their athletic pants, favorite Bobcat T-shirts and ball caps for their own superhero during the first “C.J. Miller Day.”

Librarian Kim Nelson thought of the idea to honor Miller on Valentine’s Day. “He has had a really rough couple of months with his treatments lately,” Nelson said. “We really wanted to have this day to encourage him.”

Principal Jay Rayborn said it was a no-brainer. “The first time I met him was on the bench outside after school had already started,” he said. “He’s a wonderful kid, and I’m happy he’s here.”

“We celebrated his fifth birthday in the hospital room,” said his mother, Susan Miller. “It’s still hard today, but we’re taking one step at a time.”

The cancer has caused Miller to miss school often. Even a fever will have him at the Batson Children’s Hospital in Jackson for weeks depending on the severity of it.

“The school has always been very supportive,” his mother said. “Some teachers have even visited our house when he was out of school for being sick.”

Miller has been taking treatments for three years and four months. “Next month is his last treatment and then he’ll be monitored for at least five years,” she said. “This is something that he’ll have to deal with for the rest of his life.”

His mother never knows how the day will go with him, so she was grateful to come to his school and watch him enjoy his own day.

He wore a handmade yellow cape with silver lighting bolt and his name on it Tuesday. “I’m very happy,” he said. “I like the new Hot Wheels and fishing tools I got today.”

Sue Miller said she knows her grandson knows God. “He wouldn’t be with us today if God was not in his life,” she said. “He used to tell me, ‘Grandma, I’m really sick.’ He knew of his sickness, but I’ve seen him talk to God.”

C. J. Miller Day is a part of the Pennies for Patients campaign, which is apart of the Leukemia/Lymphoma Society to raise money for patients like Miller. He is the third student diagnosed with cancer from Bogue Chitto Attendance Center.

“That’s a lot of kids for one school,” Nelson said. “We lost one student, Tori Tobias, and Sartin Felder is our cancer survivor.”

Some students also pitched in by making posters and donation boxes. Annia Tobias made a poster to honor her cousin Tori, which inspired Meghan Richardson and Kinsie Bales to make some for Miller.

“I thank Annia for coming up with the idea to make a poster for her cousin because we probably would have never thought to do one for CJ if she hadn’t,” Bales said.

Caroline Jordan made a donation box out of magazines and flowers. She wrote a note encouraging people to drop their change in the box to support Miller and those like him.

“I know my cousin is smiling down on us,” Tobias said.

A Brookhaven tourism group is bringing Mardi Gras downtown. The creative economy committee, which is under the Brookhaven Tourism Council,... read more