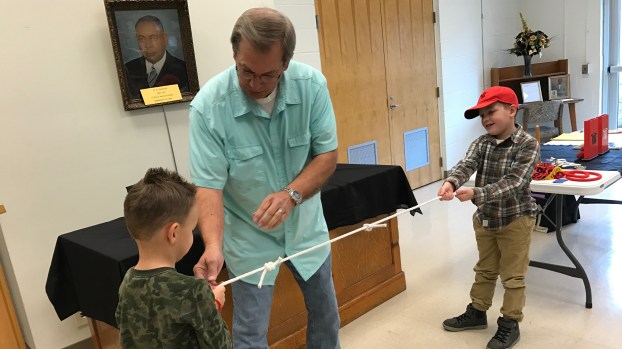 Word of God is magic: man uses slight of hand to share gospel

Magic can get us into places we normally couldn’t go. Just ask Mike Cooper.

The 62-year-old illusionist has been performing magic since he was 16. He started doing shows in 2007 to spread the word of God with his slight of hand.

Cooper performs a lot of shows around Brookhaven. He has also traveled to Indonesia with New Hebron Baptist Church on mission trips for eight years to do magic.

“If it didn’t have the gospel in it or a message in it, I wouldn’t be doing it,” he said. “I do it to spread the gospel message in the magic. It’s a good analogy to use when we use the word of God in it.”

His favorite magic trick involves three ropes of three different sizes. He uses them to compare how different people see each other; the ropes are the same sizes at the end of the trick proving that we are all the same in God’s eyes.

“I use that trick everywhere because anyone can relate to it,” Cooper said. “The trick has worked well, especially in Indonesia.”

Cooper also has a day job as a construction worker in New Hebron. His job allows him to take care of his family while his passion leads him to do his magic shows for free. “Most times, places will give me a love offering,” he said, “I’m perfectly fine with doing what I love for free.”

He practices a lot and often calls on his wife, Becky, or any of their two children, six grandchildren or one great grandchild to assist with tricks.

His biggest reward is seeing the amazed looks on people’s faces once he’s perfected his magic tricks.

“Both old and young faces are just priceless,” he said.

His crowds vary from pre-school to senior citizens. He has performed at birthday parties, churches, schools, hospitals and retirement homes in many communities. “I’ll come anywhere I’m invited, from a very small crowd to one of 200-300 people,” he said.

S.B. 2689 prohibits campaign funds for personal use. Several bills that passed the Senate last week will head to the... read more