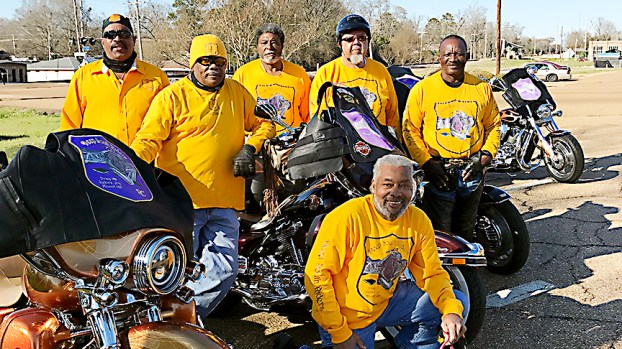 The sight of motorcycles riding in the neighborhood gets the community’s attention, especially the children.

The Deep South Riders experience this all the time. The motorcycle-riding club was formed in Brookhaven two years ago to help people in the community.

The Deep South Riders participate in a lot of community functions in Lincoln, Pike, Copiah and Jefferson Davis counties. Monthly meetings are held at the Boys and Girls Club of Lincoln County. They usually contribute to the organization with supplies every month.

“You have to be alert and aware of what’s going on in the community,” Price said. “It’s not just for the motorcycles.”

They have been a part of Brookhaven’s annual Martin Luther King Jr. parade held in January since the club started in 2015, and they hosted the annual hoop fest on Railroad Avenue last year. “We’re trying to get the kids something to do for the summer,” Price said.

The group wears purple and gold motorcycle gear. “We wear patches on the back of our vests of a man on a motorcycle praying that says ‘pray up before you mount up’,” Deep South Rider president William Price said, “Our purple stands for integrity and gold stands for success.”

Price’s ride name is Snowman. “They named me that because I hate the cold,” he said, laughing.

All 25 members, who consist of pastors and community leaders, have been given nicknames.

They shut down I-55 every year with their annual ride. They invite bikers from all over the states to ride with them. The ride starts at County Line Road in Summit and goes all the way to the Nissan Parkway in Jackson.

Their annual bike fest, “Bike Blessings” in April, serves as another way to socialize with other clubs in the community and give back. “Kids come over and take pictures with the bikes,” he said. “We want to make sure we’re doing our part so they might say they want to be like us when they grow up.”

Price said the group’s future plans include setting up a scholarship and opening a resource center, which will help kids and their parents prepare for their future.

“Right now, I’m lacking support in those areas,” he said. “I’m hoping more people will start to see what we’re trying to do to for the community.”