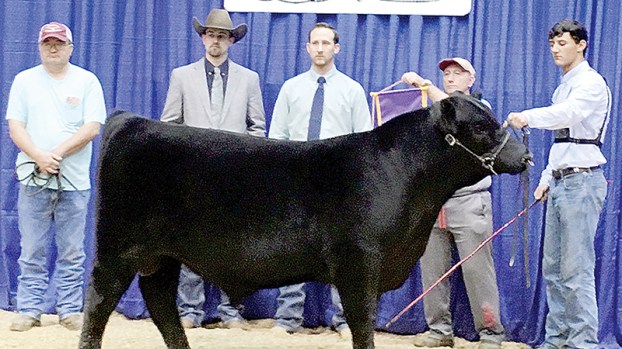 Photo submitted/Brant White, far right, won the first place Grand Angus Bull award during the National Junior Roundup. The award is given for the best bull in the breed.

Waking up early in the morning to take care of animals and then heading to school is not a problem for Brant White. He developed a passion for animals at a young age, and school has always come naturally for him.

White, the son of Diana and Kurk White, is a senior at Enterprise Attendance Center.

He competed with his beef cattle in the Dixie National Junior Roundup in January. His heifers placed fifth over several competitors and he won the first place Grand Angus Bull award at the event.

He also competed in the Dixie National Open Show, where his bull placed second and his heifers placed eighth in their class.

“My grandparents had a dairy and beef farm. My grandfather couldn’t be on the farm more as he got older because he got sick,” White said. “We couldn’t keep dairy cattle because it required too much work. I wanted to help, so I take care of the beef cattle.”

“We have summer camp called Making Tracks,” White said. “We teach kids more about the beef industry, cattle and raising your own herd.”

White wants to take his passion into the chemical engineering field. He scored 25 on his ACT, which earned him a full-tuition scholarship to Copiah-Lincoln Community College.

“I’d love to do something to help the agriculture and beef industry in Mississippi,” he said. “I could work for a place that produces fertilizers or herbicides to make sure it’s a place that’s safe for plants and the livestock.”

White plans to stay in the state to continue pursuing his passion after college.

“I’ve met farmers who have bigger operations who have taught me traits and things to help my farm and that’s what I hope to do for others in the future,” he said.