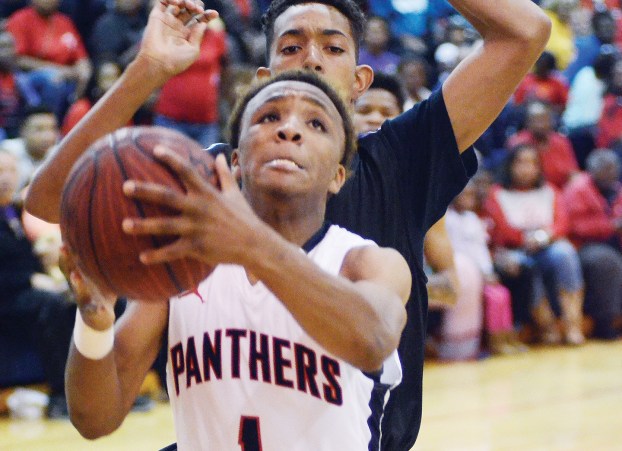 Denarius Gray of Brookhaven (1) drives past the Hattiesburg defender for the layup in their 78-62 win Saturday night.

BHS moves to quarterfinals with win over Hattiesburg

Brookhaven got a first-round bye in the 5A state playoffs after winning their district. The bye helped prepare them for their second round matchup against Hattiesburg Saturday night, which the Panthers controlled from start to finish and won easily by a score of 78-62.

The win moves Brookhaven to 21-5 overall. They advanced to the quarterfinals in Jackson, where they’ll take on Clarksdale Friday morning at 9 a.m. at Jackson State University.

The Panthers couldn’t get into their rhythm on offense in the first quarter Saturday night. The Panthers like to play at a fast pace and run up and down the court, but Hattiesburg slowed them down to start the game and the Panthers finished the quarter with a 13-9 lead.

The momentum changed in favor of Brookhaven in the second. The defense started to force turnovers and turned them into transition points. Brookhaven head coach Jimmie Butler has said it all season that the defense sparks the offense and that showed in the second quarter. The Panthers outscored the Tigers 25-14 in the quarter and took a 38-23 lead going into halftime.

The pace of the game slowed in the second half as Hattiesburg turned the intensity up on defense and forced Brookhaven into tough shots. The Tigers used their defense to create fast break opportunities to score 23 points in the quarter as Brookhaven held a 59-46 lead heading into the fourth.

Hattiesburg would hang around in the fourth quarter and cut the Brookhaven lead to only 10 points. The Tigers resorted to fouling late in the game and made Brookhaven win the game at the free throw line. The Panthers knocked down 28-of-43 attempts and put the game away by a final score of 78-62.

Senior point guard Denarius Gray stepped up with 14 points, nine assists, five rebounds and four steals on the night. Gray spent most of his night at the free throw line, knocking down 12-of-20 attempts.

Sophomore forward John Hilbert played a big game off the bench for Brookhaven with 11 points on 5-of-7 shooting from the field and reeled in five rebounds as well.

Next up for Brookhaven is a quarterfinal matchup with Clarksdale High School Friday morning at Jackson State University. The Wildcats come into the matchup with a 12-13 overall record and are coming off their 56-51 upset victory over Vicksburg in the second round of the 5A playoffs.

The winner between Brookhaven and Clarksdale will face the winner of Neshoba Central and Provine next week in Jackson.

Hundreds of adults and children turned out Saturday for “second line” parade at the “Downtown Jazzed Up” event hosted by... read more