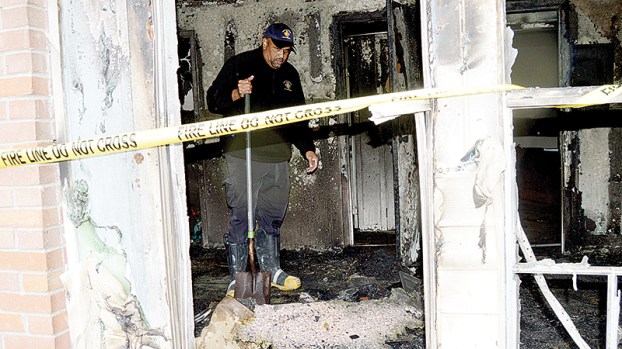 A state fire investigator today sifted through charred debris in one of the units at North Haven Apartments, searching for clues for what police believe may be arson.

A $5,000 reward has been offered for information that leads to an arrest in the case, said Deputy State Fire Marshal Medgar Gibbs.

Gibbs searched through the blackened rooms of the downstairs apartment, attempting to pinpoint the origin and cause of the fire. Caution tape was spread across the door frame and broken windows, warning individuals not to cross.

Firefighters were called to the apartment building on Union Street Extension shortly after 1 a.m. Saturday. Fire licked at the windows and smoke billowed out as a unit from Station 3 arrived.

It took about 90 minutes to put out the blaze, which destroyed the living room and bedrooms in the two-bedroom apartment and damaged other rooms.

The homeowner was not in the apartment at the time of the fire.

The windows of the second-floor apartment directly over the burned unit were broken as well.

Anyone with information about the fire is asked to call Brookhaven Police Department at 601-833-2424. Tips leading to an arrest may be eligible for a cash reward up to $5,000.

After knocking off Leake Academy 50-47 Friday night in the semi-finals, the Brookhaven Academy Cougars (28-13) found themselves in the... read more