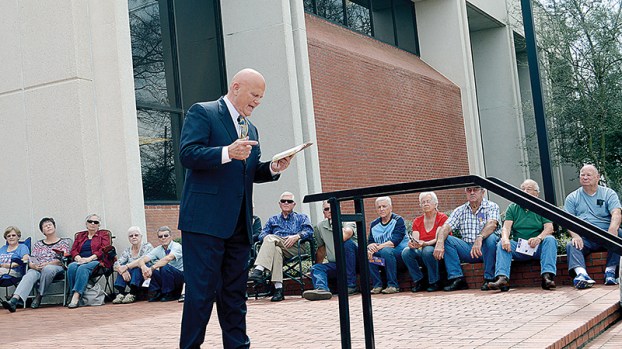 Photo by Orionna Brumfield/The Lincoln County Baptist Association hosted its first rally in the “Tell Me, Tell Someone” project at the Lincoln County Government Complex Tuesday. Jim Futral, executive director of the Mississippi Baptist Convention Board, challenged those who attended the government complex rally to tell someone about Jesus.

Futral: Just ‘Tell me, tell someone’

Southern Baptists in Lincoln County hope their message will have a domino effect.

They’re telling someone about Jesus — a lot of someones — in the hopes that those someones will tell someone, too.

The Lincoln County Baptist Association on Tuesday hosted its first rally in the “Tell Me, Tell Someone” project, which is sponsored by the Mississippi Baptist Convention Board.

The state convention has hosted rallies across the state since the first of the year. They’ll continue through March.

Dozens of people turned out at the Lincoln County Government Complex for a noon rally to hear music by Dogwood Cross and a message by MBCB Executive Director Jim Futral, who discussed the 3151 Challenge.

Steven Stone, who is over MBCB’s church growth department, explained the importance of 3151.

“We want Christians to invite people to pray for three lost people, to learn one gospel conversation, to invite five people to church and share that gospel presentation with one person,” he said.

Pastors of the 40 churches in the Lincoln County Baptist Association are encouraged to bring the challenge to their congregations. “It’s a part of our theme of telling Lincoln County the story of Jesus,” said Steve Jackson, the association’s missions director.

Sheriff Steve Rushing was in the crowd that gathered on the front steps of the government complex.

“I think that it was a wonderful program that our county and state needs at the moment to remind us that God should be the guiding force in our lives and that there are people around us who are lost,” Rushing said.

The association plans to cap its evangelism trainings with a “Tell Everyone” rally at the Brookhaven High School football field Sept. 24 at 5 p.m. The association is partnering with Lincoln County Fellowship of Christian Athletes to host the event.

Jackson said evangelism trainings have already started in some churches. To get involved, call Jackson at 601-833-8111.

Q: What’s all the repair work going on in downtown Brookhaven? How long is this going to take? A: The... read more