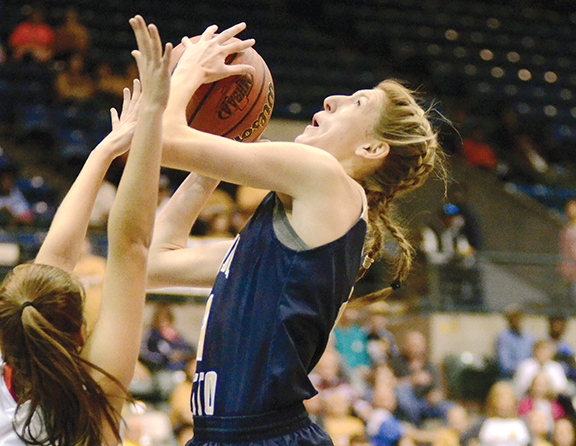 Terrah Nelson for Bogue Chitto is fouled after getting the putback in their 42-35 loss to Pine Grove in the 1A quarterfinals Thursday morning. (Photo by Dylan Rubino)

JACKSON —  Bogue Chitto senior guard Terrah Nelson was the first player to walk out of the locker room after the Lady Cats lost in the quarterfinals of the 1A state tournament Thursday to Pine Grove 42-35.

Her eyes were watery with tears as she was greeted by family and friends outside the locker room. Nelson played her last game in a Bogue Chitto uniform.

Sophomore guard Karly Leake soon walked out of the locker room with tears coming down as well.

It was an emotional loss for Bogue Chitto, but there’s plenty to be proud of.

“It was a huge deal for us to get back here. That was our main goal at the start of the season,” Bogue Chitto head coach Christi Terrell said. “This isn’t the same team from November. They fought and did everything they could to get back here. Even though we lost, I’m super proud of them of where they got and how they did it.”

The Lady Cats started the 2016-17 campaign 5-10 overall. They would go on to win 14 games in a row, making a returning trip to the Coliseum for the 1A quarterfinals.

The offense for Bogue Chitto could not get in rhythm the entire game and the offensive struggles put them in an early hole to start Thursday’s game. Pine Grove came out aggressive on defense and threw the Lady Cats off their game as they trailed 17-9 at halftime.

“With nine points at halftime, I knew it would come back to bite us, and it did,” Terrell said. “We did everything we had to do in the second half, but the first half killed us.”

The Lady Cats would need to turn around their offensive woes in order to continue their quest to repeat as state champs. Bogue Chitto would outscore Pine Grove in the second half, but the early hole proved to be costly, as their title defense came to an end.

Pine Grove shot 39 percent from the field, which was the deciding factor in the ball game.

Freshman Loren Elliot led the Lady Panthers with 21 points on 7-of-15 shooting from the field.

It’s hard to repeat as champions in any sport. Bogue Chitto had to replace five starters from last season’s state champion team, so returning to play at the Mississippi Coliseum was a tall task, but the team rallied around each other and believed they could make it back to Jackson.

The end result wasn’t what they imagined, but just making it back made it all worthwhile.

“It’s a Bogue Chitto tradition to thrive and get back to this stage,” Terrell said. “We’re going to miss some seniors and it’s going to be tough to replace those girls.”

The goal will remain the same next season and for many more seasons in the future.

“We’re going to do everything we can to get back next year,” Terrell said.