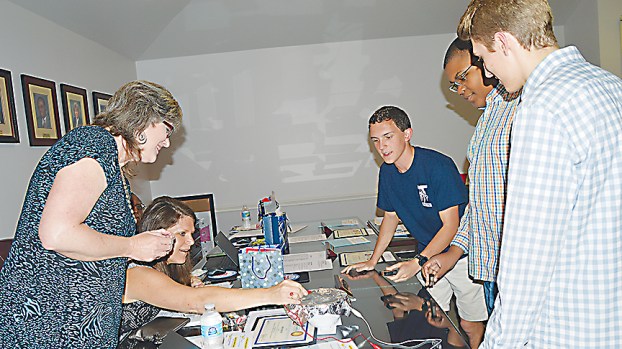 Photo by Orionna Brumfield/BHS advanced placement physics students presented one of their projects to Brookhaven School District board members during Tuesday night’s board meeting. Pictured are from left: Lucy Shell and Erin Smith; and from right: Mason Gardener, Chris Robinson and Caleb McCreary.

Susan Thames knows many Ole Brook Panthers who have gone on to become engineers, doctors or computer scientists.

She’s seen 15 years of successes as a teacher at Brookhaven High School.  “The longer I teach, the more I see what a beautiful profession this is,” Thames said. “You have a small part in a child’s life that helps them achieve what they what to achieve.

Her AP physics class is small — Mason Gardener, Chris Robinson and Caleb McCreary enrolled this year. It’s only open to up to five students every other year. Only students who excel in the regular physics class are eligible.

“I encourage the kids who are interested in becoming engineers or going into an applied physics field to take this course because it will really help them when they go to college,” Thames said.

Gardener, Robinson and McCreary presented one of their physics projects to the Brookhaven School District Board Tuesday.

“They made a mini plasma cutter out of batteries, lead wires, aluminum foil and graphite from pencil lead,” Thames said. “They were able to vaporize aluminum using the resistance provided from the graphite and the electric current that was provided by the batteries.”

This is just one of several do-it-yourself intensive level theory work projects Thames encourages the trio to complete.

“Once we cover the theory, I usually try to find several applications where they can go in there and build what we learned,” she said. “I provided the instructions to some of those and some of them I let them figure out on their own.”

Thames loves to challenge her students because she knows that will prepare them for the real-life situations they’ll face during and after college.

“One of the things they built was a motor using magnets, batteries and wire. I told them to find some instruction on how they needed to build it, and they did,” she said.

Thames has always had a love for the physical sciences. She’s also certified to teach chemistry and biology.

The school district provides additional funding every other year to allow teachers, like Thames, an opportunity to teach advanced placement courses. She’s proud of her students’ success with the project.

“They did it themselves, but I helped encourage them and made them feel like they could do it,” Thames said. “That’s a very rewarding feeling. The longer I teach, the more I feel that way.”

In other business at the school board meeting Tuesday:

• The board approved the BHS Tennis Booster Club’s donation of $2,493.75 for team uniforms.

• The policies for the professional personnel resignations and gifted student program were approved.

• The request to review and vote on the 2017-2018 draft school calendar was approved.

Brookhaven Police are seeking the public’s help locating a trio of alleged thieves who emptied a hotel room of its... read more