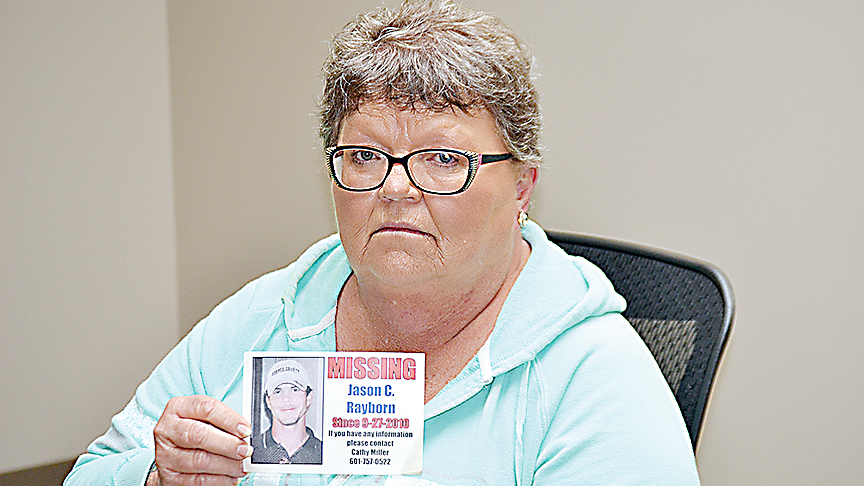 Photo by Donna Campbell/Cathy Miller holds her son’s missing flyer, fighting back tears. He’s been missing for seven years, and she has offered a reward of up to $10,000 for tips leading to discovery of her son.

Cathy Miller cried as she uttered those words. She’s been praying to find out the truth since she reported her son, Jason C. Rayborn, missing seven years ago.

She has struggled with thoughts of never seeing her son. But she also wants to know what happened to him. She even dreamed he disappeared.

“I was asleep and I saw somebody pull up to a place where a stop sign was supposed to be, but the stop sign was gone. It was on a moon lit night.” Miller said. “It was a yellow sign that said to go that way or the other way. The driver took a left, opened the back door of the car and rolled my son down the hill.”

Miller jumped out of her bed and quickly filed a missing report at the Wesson Police Department. It was Nov. 23, 2010. Rayborn had been missing for almost three months by that time.

Rayborn was staying in Wesson with his mom. He was on a 30-day probation issued out of Covington, Louisiana, which required him to report back to the state for an extension every 30 days.

“He never came,” Miller said. “He was supposed to report back to his parole officer on the 28th of September [in 2010].”

Miller said no one in the family or any of his friends have heard from Rayborn. She does not believe her son would disappear without telling at least one person where he was headed.

“You’d have to know Jason,” she said. “He would never stay away from me or his brother.”

The mother has gone through additional heartbreak since Rayborn’s disappearance. “My momma died in 2011 and his older brother was diagnosed with stage 4 cancer in 2012,” she said. “There’s no way he wouldn’t be around for that.”

Rayborn had an ex-girlfriend in Louisiana. Miller said he was deeply in love with her and believes he may have gone to visit her.

Miller contacted Kentwood Police Department, but the officers told her they had no leads on her son.

She has kept an ongoing relationship with the officers at the Wesson Police Department. Wesson Police Chief Chad O’Quinn said he’s done everything he can in his power to help Miller.

None of the officers, from either of the police departments, have had reason to bring anyone in for questioning about Rayborn.

“It’s not a crime to be missing,” O’Quinn said. “We got information of where his truck was located in Pike County, and I’ve sent officers there, and to Louisiana.”

“We’ve never had any leads that resulted in any information of where he may be,” O’Quinn said. “A new Pike County sheriff has been elected since the case opened and I’ve asked them to take a fresh look at the case.”

However, nothing else has been reported.

Rayborn is listed on the National Crime Information Center as a missing person. This website helps law enforcement agencies with missing person cases like Rayborn’s, who is also considered a fugitive since he never reported back to his parole officer.

“I want a resolution from this,” O’Quinn said. “We want to know where he’s at… if he’s OK and if he’s not… we want to know what happened to him. We’re going on seven years now so we have to remind people that her son is missing and we don’t have any new information.”

Anyone with information about Jason C. Rayborn should call the Wesson Police Department at 601-643-2211. Tips leading to his discovery may be eligible for a cash reward up to $10,000.