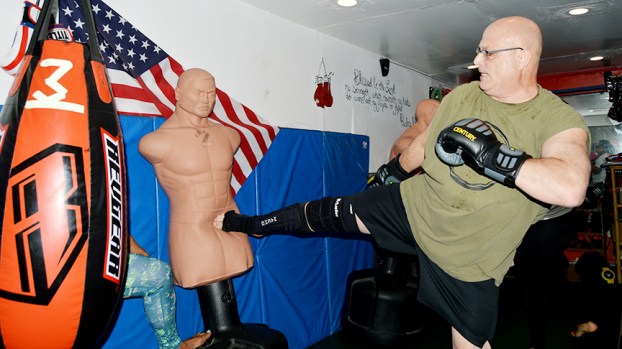 Photo by Orionna Brumfield/Terry Pappas started working out at Knuckleheadz Jufitsu and MMA studio a few months ago. His diabetes is now under control and he does not have to take insulin anymore.

Exercise business growing by kicks and bounds (with video)

The trainer counts sets, her voice booming because of her microphone.

The music is jamming. The bodies are sweating.

It’s a typical workout at Knuckleheadz Jufitsu and MMA in Brookhaven.

Workouts at the Shady Lane studio, which also offers mixed martial arts instruction, has attracted law enforcement officers, student athletes, workers and parents who can bring their children 10 and up with them.

They may start with a primary goal of losing weight, said owner Michelle Eddy, but what they gain is so much better.

Like Terry Pappas, who owns a Greek and Cajun inspired pizzeria and took insulin to control his Type 2 diabetes.

The workout sessions have replaced Pappas’ insulin shots and he’s also eliminated two other medicines from his regimen, he said.

Eddy and her husband, Matthew, teach ju-fitsu, which is a combination of jujitsu and fitness. “The kickboxing also comes along with that. It’s great cardio and a life skill,” she said, explaining that the techniques can also be used for defense.

“Jufitsu can be used for anti-kidnap and anti-rape situations,” she said.

Latyria Washington, a respiratory therapist at King’s Daughters Medical Center, has been taking classes for almost a year after hearing a co-worker sing the Eddys’ praises. “I’ve never had any health problems, but I didn’t like how I looked,” she said. “Since I work in the health field, I knew all the health risks I could’ve faced.”

Washington has committed to her workouts and is down 40 pounds.

The Eddys brought these workout techniques to Brookhaven three years ago.

Matthew Eddy is a second-degree black belt in Brazilian jujitsu, and Michelle Eddy started working out after she had their daughter Jasmine, who is now 7-years-old and loves to mimic her mom in the classes.

Membership at Knuckleheadz has grown to over 70 individuals by word of mouth and social media.

There’s even a lone Brookhaven fire fighter who has joined the jufitsu crew, she said.

“I love seeing pictures of how people looked when they started versus now,” Eddy said.

The Eddys offer scholarships to up to three students at a time who can commit to maintain good grades and attend all sessions.

The fitness trainers also have a scholarship program for students who have parents dealing with financial hardships. They offer up to three scholarships at a time.

“The kids really enjoy it,” Eddy said. “I had one student who was acting up one time and he quickly changed his attitude to keep coming to the sessions.”

The Eddys’ workouts are always changing. “You never know what you’re going to be doing until you get here,” she said.

“I know all my clients, and we encourage each other. It’s important to attend as many sessions as possible because I’m going to teach something new every time.”

Waste Pro representatives appeared before the Lincoln County Board of Supervisors again Monday to answer complaints of missed stops on... read more