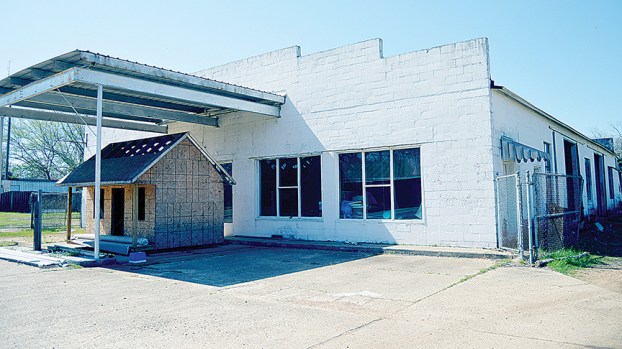 Photo by Orionna Brumfield/A vacant building next to the Wesson Police Department on Hwy. 51 will be torn down to make way for a Family Dollar.

Family Dollar plans to build on Hwy. 51 in Wesson

The old vacant building next to the Wesson Police Department will be razed to make room for a Family Dollar by the end of the year.

Wesson Mayor Alton Shaw told the Board of Aldermen Tuesday this is just another way to improve the amenities of the community.

“We’ve been working on this for about six to eight months,” Shaw said. “We’re constantly looking for new economic development.”

Aldermen approved the variances and building signs at the Tuesday meeting.

Shaw said the store would be built and ready for business before the end of the year.

The board also voted to use two companies, Dickerson & Bowen Inc. and TL Wallace Construction, for upcoming road improvements.

“This will be a two-step process,” Shaw said. “Dickerson & Bowen will do the overlaying and pre-leveling, and TL Wallace will come in to do the main bulk of it.

“We’re going to be able to do probably four to five miles worth, and that’ll cover mostly everything.”

That’s a little more than half of the road mileage in the town.

Shaw said he would be speaking to Jonathan Myrick from TL Wallace Construction to discuss the actual roads to be worked on and mileage Friday.

• The Central Mississippi Planning Development District has rebuilt the City of Wesson’s website, which was hacked about two years ago, Shaw said.

• A Wesson-specific smart phone app, “311,” will be available to download soon through the Apple or Google Play app store. Residents can use the app to report problems, like a leaking fire hydrant, to City Hall without making any calls. Another app is still in planning stages, but would include a GIS system that would allow users to take picture of the problem and include it with a map to report an issue.

• The minutes from the Feb. 7 meeting were approved.

• The February 2017 claims were approved.

One bill championed by Sen. Sally Doty, R-Brookhaven, passed the Senate unanimously Wednesday, while another died by a vote of... read more