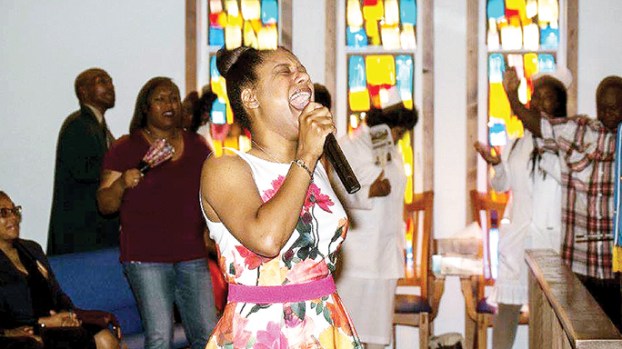 Photo submitted/De’Anna Caston received her first speaking opportunity at her church, The Truth Church, in Michigan. She’ll be back home in Brookhaven to speak at Mt. Wade Missionary Baptist Church on Sunday.

Brookhaven native to bring the word

When you’re raised in the church, it’s not hard to get to know God.

De’Anna Caston was raised in Brookhaven in a family of worshipers. She knew God wanted to use her at a young age to spread his message.

“It started through singing in church. I noticed that my singing would spill over into ministering and encouraging. But it frightened me at first so I ran from it,” Caston said. “It wasn’t until I got to Michigan and under the right covering that I slowly began to step into where and what God was calling me to do.”

She will be returning to Brookhaven Sunday as a keynote speaker for the “Inspiring Women, Stepping into Royalty” program at Mt. Wade Missionary Baptist Church.

The women’s day program will begin 10:30 a.m. The event is open to the public.

Caston believes that God gives everyone choices. Although she didn’t choose to answer her calling at first, she made the choice to seek God further after she moved to Michigan.

Caston met her mentor, Rev. Kimberly R. Whitsett, who helped her overcome her fears to speak in public.

“She taught me that everything you need is already inside of you,” Caston said. “A lot of times we let fear take the front seat and we take the back seat.”

The 35-year-old let go of her fears, and has made a promise to keep going wherever God is telling her to go.

Caston said this is her first time speaking somewhere other than her church.

“I know they saw a Facebook live post of me doing my word up at The Truth Church,” Caston said. “They had to have seen the God in me to ask me to come out and pursue this opportunity.”

Caston was also baptized at Mt. Wade, and that makes it even more special for her.

She gained her first two speaking opportunities at her Michigan church, The Truth Church, under Pastor Christopher J. Whitsett.

“I had in the back of my mind, that everybody was not going to receive everything I say, but everyone supported me and the house was full,” Caston said. “It further solidified the fact that I was on the right path.”

Now that Caston is fulfilling the calling God gave her, she plans to help other women to do the same during the program.

“I’ll be showing them who they are in Christ and honing them on their identity. Sometimes life beats us up so bad that we forget who we are,” Caston said. “I’ve done my part to prepare for this. I have my nerves, but I have my God. He promised never to leave or forsake me.”

Hard work is what makes an Eagle

A project to improve the playground at the Exchange Club Park is Devine-ly inspired. The park needed some routine maintenance... read more