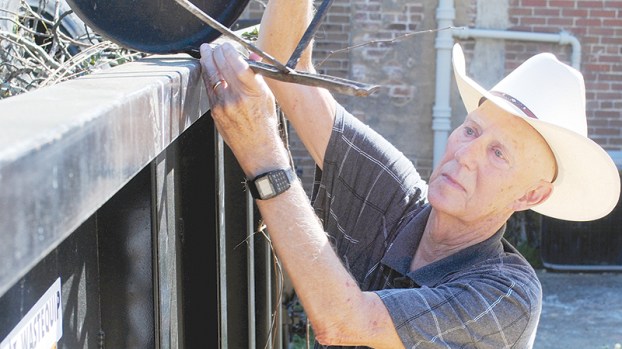 Photo by Donna Campbell/Homer Richardson with Keep Lincoln County Beautiful is getting a head start on Dumpster Days. The annual event begins April 6 and will run through May 7. Dumpsters will be available throughout the county for free disposal of household items and white goods.

Spring is a good time to get rid of the old and bring in the new. But what to do with all those unwanted household items that can’t be salvaged or sold?

You could just toss them out — but only in a free, legal way that won’t damage the environment or cost you fines for littering, said Homer Richardson, a board member with Keep Lincoln County Beautiful.

The organization is sponsoring Dumpster Days as part of the Great American Cleanup April 6 through May 7.

Dumpsters will be strategically located throughout the county — one in each of the five districts, Richardson said.

The organization’s goal is to keep residents from traveling more than five miles to dispose of their unwanted household goods. Make it convenient and people are more likely to use the dumpsters, which keeps Lincoln County beautiful, Richardson said.

What can go in the dumpster? Disposable items accepted during Dumpster Days are furniture, mattresses, TVs, building materials and similar items, Richardson said. Automobile tires and white goods — refrigerators, air conditioners and stoves — and other large items should be placed on the ground near the dumpster, he said.

Some items — paint, oil or any hazardous materials — aren’t allowed in the dumpsters. Residents can dispose of those items when Keep Lincoln County Beautiful hosts its Hazardous Waste Day, which is planned for October.

Commercial tires and household garbage also will not be accepted.

Richardson asks that people do not scavenge at the dumpsters.

“This helps people get rid of things they need to get rid of. This will help keep our county clean,” Richardson said. “It a legal legitimate way to get their stuff hauled to the appropriate place.”

The service is free thanks to a grant awarded to the county through the state’s Keep Mississippi Beautiful program.

Richardson has seen a change in the county since Dumpster Days began over 15 years ago. Prior to providing easy access to dumpters once a year, it was not unusual to see unwanted debris thrown in creeks and ravines, or even left on the side of the road.

Richardson hopes Lincoln Countians will take advantage of the opportunity to get rid of household items and white goods. “If we don’t get a place to put this stuff, it’ll just trash our county,” he said.

Dumpsters will be available on the following dates in the specific locations listed:

• April 6-9 in District 1: Lot on Monticello Street and Nola Road

• May 4-7 in District 5: Lot at James Case’s store and California Road

All dumpsters are open to anyone in the county during the times listed, not just the residents in that district, he said.

The Co-Lin golf team rallied on day three of the Ron Marshall Spring Fling to finish in third place, the... read more