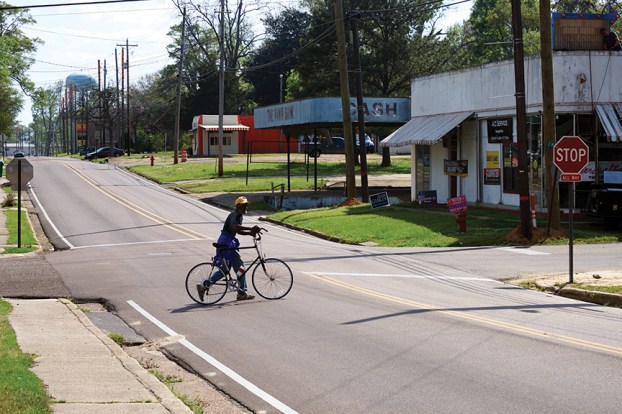 Photo by Donna Campbell/A Brookhaven man pushes his bike across First and East Minnesota streets Thursday past illegally-placed political signs. Though in front of a business, the signs are in one of the city’s rights-of-way between a sidewalk and the curb, said David Fearn, Brookhaven building inspector. Fearn will pick up such signs around the city Monday.

All signs violating the city sign ordinance will be removed Monday and lawbreakers could be fined.

Illegally-placed signs can become a safety hazard when placed in the city’s rights-of-way — that area between private property and the street.

“If you look and all you see is a sign, you could pull out and get hit and you don’t want that,” Fearn said. “Most of these signs are small, but any of the bigger signs that would block traffic are those that I would look at closely.”

Fearn said this problem — and the signs — tend to pop up each election season.

According to Fearn, there are five general rules for signs placed in the city:

• No signs can be attached to a power pole.

• Signs cannot be in the grass between a sidewalk and city street.

• If there is a ditch and no sidewalk, the sign has to be on the house side of the ditch.

• If there is no ditch and no sidewalk, signs have to be on the house side of the power line.

• In the central business district downtown, political signs cannot be in the planters that are on the sidewalk because that is city right-of-way.

“The politicians may not have put these signs out, so I have to take that into account, too,” Fearn said. “That’s why I go to them and ask them to have them moved.”

Any city resident committing vandalism — placing signs without permission or destroying or removing other candidates’ signs — can be fined up to $1,000, said Fearn.

Brookhaven aldermen are a step closer to finding a replacement for the city’s animal shelter, which houses strays, throwaways and... read more