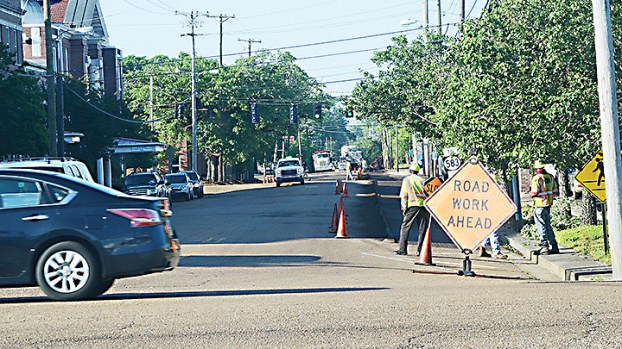 City on the road to next project

A massive paving project that created smoother rides on over 70 of the worst-rated Brookhaven streets was finished on time and came in only slightly above budget, said Dungan Engineering’s Ryan Holmes, the engineer over the project.

With all work finally completed on that project, it paves the way for the next one, which will change the traffic flow on several downtown streets to one way.

The most recent project, which began Jan. 29, 2016, was completed in August, though a few punch list items were completed after that over the course of a few months.

“The project was completed on time and within budget,” Holmes said. “It won’t affect taxpayers and the $3.1 (million) number quoted was an approximate number.  We certainly could have said $3.16 million, but we commonly reduce and use round numbers for ease of discussion.”

Brookhaven’s infrastructure includes 395 streets, which equals about 158.4 miles. If you placed all those roads end to end, it would stretch from Brookhaven to Biloxi.

Dungan Engineering did an analysis of the streets and rated them based on four conditions:

• Failed — the road needs to be completely re-done.

• Poor — the road is on the verge of falling apart.

• Fair — the road is in decent shape, but it needs maintenance before it starts to quickly decline.

• Good — the road should be in this condition for at least 10 years depending on how often it is used.

Holmes said they repaved the selected group of streets first because they were in the failed category. He said the next street project will focus on the 28 streets in poor condition. After that, they’ll repave about 40 percent of those roads identified in fair condition.

“Dungan Engineering designed the plan and were on site daily with the contractor observing the work. In total, we worked well over a year on this project … from conception to completion,” Holmes said. “People don’t usually see what we do, but you can actually see the paving. Someone told me they could actually leave their house and drive to work and church on newly paved streets.”

Mayor Joe Cox said they are still in the planning stages for the next street project.

“The city is very pleased with the recent paving project. It came in on time and on budget,” Cox said. “This was the largest comprehensive paving project completed in many years.”

Holmes said the downtown parking and paving project will start in a few weeks.

“It is weather dependent, but the paving will take place mostly at night,” Holmes said. “We need the temperature to be mostly 60 degrees for a total of 15 nights. It shouldn’t take longer than four to five weeks max to finish.”

The mayor and the board of aldermen approved the budget for the downtown parking-paving project for $65,000.

Holmes said it is important to maintain roads to stop infrastructure from reaching failed and poor conditions.

“Yearly maintenance will cost a lot less money,” he said. “But if you wait until the road has failed, it can cost 10 times the amount of money.”

The 2016 road-paving project was different from the way paving had been completed in the past. To provide a systematic plan of assessing and grading streets by professionals, the city hired Dungan Engineering to evaluate and present to the board a plan to improve the major thoroughfares and poor or failed auxiliary roads. With the plan, every street in the city was evaluated by Dungan Engineering, and paving funds were directed to those streets that were found to be in the worst condition.

Dungan Engineering used the Pavement Condition Index rating system as they traveled streets to evaluate them. This system measures type, extent and severity of pavement surfaces and the smoothness and riding comfort of the street. Age of surface, condition of surface and amount of traffic are factored into the thorough evaluation of the streets in a systematic way.

Higher-volume streets were striped both at the center and the edge. Milling was completed where deemed necessary by the consulting engineers.

Cox said last year the engineering firm estimated a cost of $1.4 million dollars per year to maintain Brookhaven streets. However, he said, budget constraints do not allow the city to budget all of that amount in one year. Each year, poor and failed streets will be evaluated for repair.

Brookhaven dentist Don Doty has gone viral on Facebook. A post from the dentist on Thursday has racked up more... read more