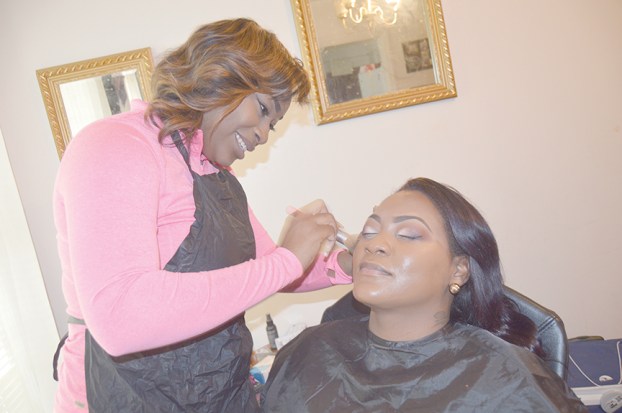 Photo by Orionna Brumfield/Sha’Kera Brewer is a full-time makeup artist who loves to make her clients look and feel beautiful. Pictured are, from left: Brewer and Keshundra Drummond.

Brookhaven resident ‘makes up’ her purpose (with video)

It all started with eyeliner.

“I knew I wanted to do more than simple makeup,” Brewer said. “I started off watching YouTube channels, and it wasn’t long before I was self-teaching myself.”

The Brookhaven native transformed her hobby into a passion. At Brookhaven High School, she did makeup for a few friends in cheerleading and school productions.

“When I started seeing people wanting to get their makeup done by me, that’s when I realized I was good,” she said.

Brewer knew she wanted to go to school for cosmetology with a focus on makeup, but some people did not support her dreams.

“You have people who would say cosmetology, makeup, etc. is not something you can grow from. You can’t do much and it’s just a side job,” Brewer said. “When people would tell me that, I would always listen to what they’re saying and not listen to myself.”

Brewer put makeup on the back burner and pursued nursing school for almost two years. After she passed the entry-level test for nursing school, she decided it wasn’t for her.

“I got tired of waiting for something I didn’t want to do anyways,” she said.

Brewer let go of all of her insecurities and decided to seek God for the right answer.

She tried many other things, but she said nothing else worked.

“God would not allow anything else to work because he wanted me to do makeup,” Brewer said.

She said she started to receive God’s message from other people — step-mom Deundra Brewer, boyfriend Avery Leggett Jr. and step-dad Robert McCall Jr. — who also encouraged her to follow her dreams.

“I realized about four months ago that [makeup] was what I’m supposed to be doing. My clientele grew larger, and I have weddings, and people are booking a month before because they know I’m going to be booked,” Brewer said. “I just know it’s for me because if it wasn’t, I wouldn’t be improving as much as I am and building my clientele as much as I am.”

Brewer said she’ll continue to step out on faith and pursue her license in all aspects of beauty — makeup, cosmetology, manicures and pedicures — and start her own business after she finishes.

“The more people told me I can’t do it, the more I kept to it and prayed about it,” Brewer said. “If you know that’s something deep within that you want to do, then you have to step out and do some extraordinary things — things that you don’t think you’ll be able to do. If God is continuing to let you do what you’re doing, you’ll realize it because you’ll just hear him say ‘keep going.’”

Worker pleads to assault of elderly

A former Brookhaven nursing home volunteer who turned himself in to authorities after he was accused of fondling a resident... read more