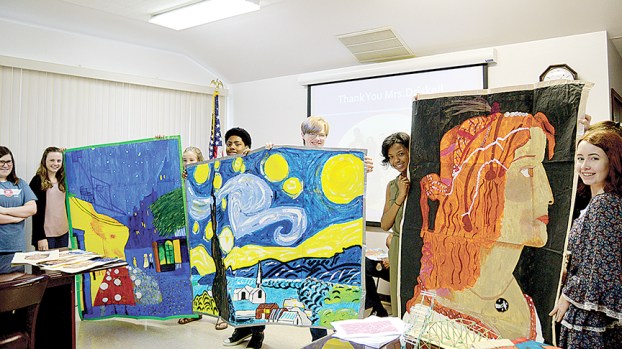 Photo by Orionna Brumfield/Several students in Alexander Jr. High School’s Quest class, taught by Vickie Driskell, present their artistic creations to the Brookhaven School Board. The pieces are submissions for a lesson on masterpiece reproduction and drawing to scale. Pictured are, from left: Merritt Wolfe, Brooklyn Skolsky, Nick Freeman, Dylan Becker, Katie Humphreys and Lauren Mabry.

Alexander students on a ‘Quest’ for great art

It was a show-and-tell of sorts as students from Alexander Jr. High School’s gifted class approached the Brookhaven School Board Tuesday night ready to share.

Quest students brought some of their class projects to show the board.

Vickie Driskel has been teaching Quest classes to seventh and eighth graders for 15 years.

Each student explained their project. Driskell said the students enjoyed making projects like masterpiece reproduction and drawing to scale after fulfilling the requirements of writing essays or attending trips.

Driskell also told board members about some of her group discussions, which focus on developing leadership and real world experiences.

“In group discussions, we use the 2-cent rule. Everyone actually gets 2 cents.  They can have input for each cent. But when they have used their 2 cents, they have to wait until everyone in the group has had an opportunity to express their two ideas,” Driskell said. “This really teaches them to engage appropriately in group discussions. We tackle community problems in the school as well as in our town, again preparing them for real-world jobs.”

The mother of three said she knows how much of a struggle it is for junior high students. Her goal is identify the struggles and help her students get through them.

“I hope that I am able to teach them to find their special talent and place in the world. We spend a lot of time talking about being the unique person they were meant to be,” Driskell said. “We focus a lot on where we want to go in our life, what we want to study, and how to make a plan to make those dreams come true.”

In other business at the school board meeting:

• Superintendent Ray Carlock announced Pat Lowery as the new board president. He replaces Erin Smith, which is a change that occurs yearly.

• AJH Principal Patrick Hardy was awarded a $900 check from the Alexander High School Reunion Committee for the AJH sound system.

• Finance director Linda Reeves was awarded a certificate of appreciation for a good review on the financial audit report for the district.

• Changes to the 2017-2018 elementary and secondary handbooks were given out by Deputy Superintendent Rod Henderson. They will be reviewed and possibly approved on April 25.

“The ice cream truck is coming!” Yvonne Bates yelled at the kids to get their money ready. “They get so... read more