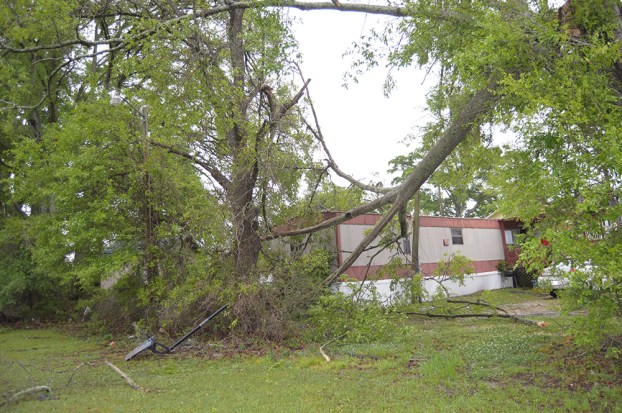 The Brookhaven Board of Aldermen signed an emergency proclamation Thursday that will help the city recover some expenses for employee overtime hours and fuel used in storm cleanup.

Mayor Joe Cox and all aldermen were present to sign the proclamation.

“We have to make sure everything is documented,” Lincoln County Emergency Management Director Clifford Galey said. “If we are lucky enough for there to be some federal assistance, we’ll be ahead of the game and have all of that written down.”

Galey said the damage in Brookhaven was the result of strong straight-line winds. He said winds topped out at 80 mph as the storm pushed through early Thursday.

“It might not be enough damage to get a (disaster) declaration, but that proclamation is the first step for us,” Galey said.

Three homes were destroyed, but no major injuries have been reported, he said.

Galey said FEMA and Red Cross workers will give him a damage assessment that will include a complete list of damaged homes with addresses.

“We’re guessing we’re going to have somewhere around 25 to 30 homes, maybe more than that,” Galey said.

The Brookhaven Police Department has been out since early Thursday morning to help clear streets and direct traffic.

“We came up with a list of the trees that the city department can get to,” Chief Bobby Bell said.

The list included 32 closed streets. Twelve streets had been cleared as of noon Thursday, according to Public Works Director Keith Lewis.

Lewis wants residents to be aware of power lines in trees. “They need to contact their energy company to make sure everything is off before they start cutting,” he said.

There was also about $6,000 in damage to fences and bleachers at the Hansel King sports complex.

“I just want to encourage everybody to stay out of the way of these cleanup crews. Entergy and our guys are out there trying to get these streets clean and restore power,” Cox said. “Times like this is when the best of people come out and they all pitch in . . . I’m blessed to be here and that nobody was injured or killed in this situation.”

Shelter re-opening at 8 p.m. in Brookhaven

The Brookhaven Building will open today at 8 p.m. as a shelter for anyone who needs a place to stay through... read more