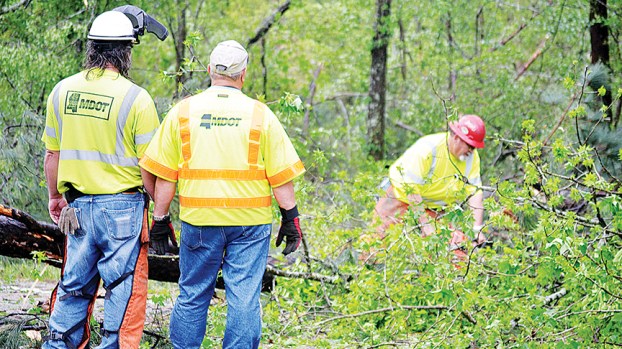 He said 3,150 customers lost power in Brookhaven, but nearly half received power again the same day. Power was restored to the remaining customers by Friday night.

Over two-thirds of the city — the courthouse, city hall, three schools and most of downtown — was affected by the damaging winds.

“The hardest hit area was Hwy. 51 South, 84 east back up to Monticello Street. The rest was scattered,” Runnels said.

Entergy Senior Regional Manager Clarence Irby said many residents might not understand how the system works when the power goes out after a storm.

“From the beginning, the first thing we do is start assessing so we can see what we got and get the crew up as fast as we can. We don’t want to sit and work on one case and several poles are down,” Irby said. “We want to understand how severe and how much we got down and the number of resources we need to be calling.”

“It’s going to be a couple of weeks, but everyone should be patient with us as we get this picked up and back to normal,” Cox said. “I want to thank everyone for all of their hard work.”

Lincoln County Emergency Management Director Clifford Galey said another round of storms could hit Brookhaven Monday, but he expected schools in Brookhaven S to be open Monday.

Galey corrected the number of damaged homes from 31 to 30 due to him misreading the report. He said four homes were destroyed, nine have major damage, 10 have minor damage and seven were affected.

The early Thursday morning storm brought strong straight-line winds that downed dozens of trees in the city. No one was seriously injured in the storm.