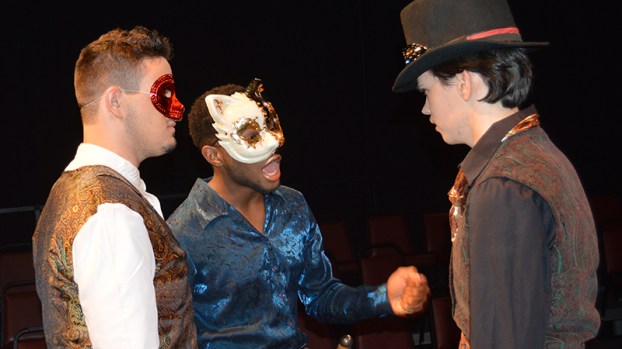 Photo by Orionna Brumfield/From left: Michael Bonilla, Levarious Goods and John Elliot Ward prepare for the upcoming play Thursday at the Mississippi School of the Arts.

Mississippi School of the Arts presents ‘The Rover’ Thursday through Saturday

The classics meet punk for a weekend showing of “The Rover” at Mississippi School of the Arts.

MSA theatre students will present the play at the Enochs Black Box Theatre Thursday through Saturday at 7 p.m. nightly. Tickets are $5.

The play will follow Brooks’ tradition of bringing classic plays to Brookhaven in the spring.

“I try to do a more modern play in the fall for the seniors and a classic play in the spring for everyone,” the theatre instructor said.

While “The Rover,” written by British playwright Aphra Behn, is set in late 1600s, Brooks updated the play’s costume direction by adding a punk-style theme.

The women will be dressed in bright colored dresses, with a great amount of eye shadow, lipstick and accessories while the men wear button down velvet shirts, hats, masks and swords.

Brooks said the costumes will be one of the first things audience members notice as they sit alley style — on two opposite sides of the stage facing each other — in the black box theatre.

Brooks has been working with his students since January. His goal is to make sure they fully develop their characters’ roles, no matter how big — or small — their part is.

Junior Mylan Bradford plays a servant, as well. He said he developed his role from lessons he learned in the classroom.

Jaelon Love is a senior who portrays one of the main love interests, Florinda. “It’s about mine and Belvile’s struggle to keep our relationship alive,” she said.

Brooks’ students said they’ve gained many life lessons from acting in the play.

“You can learn persistence,” student Jon’Elle Hahn said. “If it’s what you want, you should go after it no matter who’s there to stop you.”

Brooks said the training students get at MSA prepares them for their future if they continue to pursue acting.

“In my opinion, they get cast more often because they’ve had more experience and more knowledge when they enter. Their experience and knowledge makes them stand out,” Brooks said. “We have several that are working professionally in theatre and one who’s been on a network TV show.”