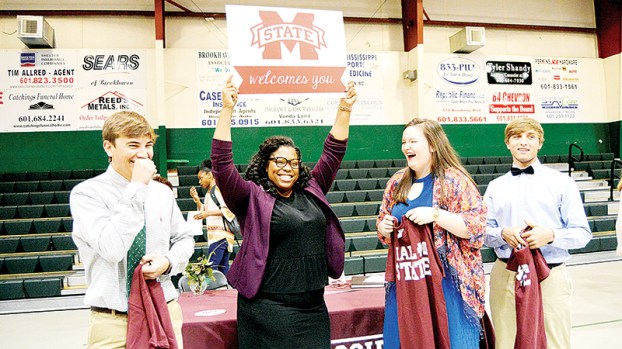 With the end of the school year rapidly coming to an end, West Lincoln Attendance Center Principal John Shows wants his 58 seniors to know the importance of the choices that they’re making.

This is Shows’ first stint as a principal at a K-12 school, and he brought with him an idea for a program he helped establish at Strayhorn High School and Senatobia High School when he was there.

“My counselor came up with this idea four years ago and told me that she wanted to do a Decision Day, which is similar to the athletic signing day, but it would be for all the seniors,”

West Lincoln’s Class of 2017 was honored with “Decision Day: College and Career Path to the Future” recently in the Jack Case Gymnasium.

Shows said having a Decision Day gives all his students an opportunity to talk about their future.

“Our fourth graders sang [during the program] and it gave an opportunity for a lot of these conversations to occur in our lower grades,” he said.

“West Lincoln would like to thank those who have joined us to celebrate the decisions of our seniors,” Shows said. “Thank you to the alumni, volunteers and representaives from colleges, universities and career paths for supporting these students’ decisions for the future.

“Thank you parents and guardians for allowing West Lincoln to be a part of your child’s education team. All of us have a role on the team — the student, parents, teachers and community in achieving student career goals.”

Of the 58 seniors graduating from West Lincoln, 56 are choosing to further their education in college, while two are headed straight into careers.

Three will be going to Mississippi State University and one picked Southern Miss.

“The experience was amazing,” Price said. “I feel really honored that Mr. Shows had worked really hard for us to have this day.”

Curt Thornton is the only West Lincoln senior going to Mississippi College.

“God wants me to go to [Mississippi College]. I’m going to major in ministerial studies.” Thornton said. “I want to thank Mr. Shows for bringing the Decision Day here. Now that I know where my classmates are going, I can keep in touch with them.”

“This was exactly what I envisioned it to be,” Shows said. “It came together like it has in the past and it’s really going to make an impact this year.”

The winning Democratic candidate for Ward 3 alderman in the primaries will face an independent in the general election, while... read more