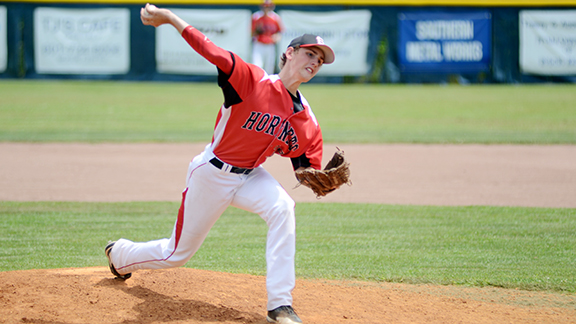 Sophomore Dane Smith of Loyd Star (23) dominated on the mound and at the plate in their win Friday over Bogue Chitto to move to 26-0. (Photo by Dylan Rubino)

The Loyd Star Hornets had a busy couple of days as they faced Lincoln County rival West Lincoln in a doubleheader on Thursday and faced Bogue Chitto Friday afternoon to wrap up the week.

The Hornets had no problem getting past both schools as they swept the doubleheader against the Bears and took down the Bobcats Friday by a score of 13-3.

The win keeps Loyd Star perfect on the season at 26-0 and a commanding 13-0 in district play. The last game of the season for Loyd Star comes Tuesday evening when they hit the road to face Franklin County.

Loyd Star took control of their game against Bogue Chitto early, scoring six runs in the first inning to give sophomore pitcher Dane Smith early run support to work with.

Smith looked comfortable on the mound from start to finish and pitched a good game, going six innings and giving up three runs (one earned) on four hits, no walks and six strikeouts.

The offense backed Smith up from there on out, scoring seven more runs over the course of the game. Bogue Chitto made a run in the bottom of the fourth inning, but Loyd Star won the game handidly 13-3.

“I’m proud of the guys for bringing the intensity after playing two district games last night,” Loyd Star head coach Jared Britt said. “The bats were hot and gave Dane (Smith) plenty of run support. Defensively, we struggled some, but that is to be expected sometimes with the guys being a little tired.”

Defensively, the Hornets struggled with six errors on the diamond, giving Bogue Chitto plenty of chances on offense to make a deep run.

Smith got himself into some tough jams, but pitched his way out of it to stop any further damage.

Smith had a big day at the plate as well, going 3-for-4 with two doubles and a single, and one RBI on the afternoon.

Senior Cole Smith had a big day going 3-for-4 at the plate with two RBIs, including a two-run homer, a double and a single. Junior Tucker Watts followed up going 2-for-4 with a solo homer and a single to rack up two RBIs. Senior Bradyn Brister also had two RBIs for the game.

Watts had a big day at the plate for Loyd Star in game one with a grand slam to extend the Hornets’ lead. Seven players for Loyd Star all recorded one RBI.

Senior Daniel Spears took the loss on the mound for West Lincoln, pitching seven innings, giving up 11 runs (seven earned) on eight hits, four walks and four strikeouts. Spears also went 2-for-4 at the plate with two RBIs for the Bears.

Senior Seth Bivens and Nathanael Addison each went 2-for-4 at the plate for West Lincoln.

Led by the hot bats and a dominant pitching performance from senior Parker Flowers, Loyd Star cruised in game two and completed the sweep by a score of 14-1.

Flowers took command of the game from the very first pitch, going five innings and giving up one earned run on one hit, six walks and 10 strikeouts.

Watts continued to swing a hot bat and jacked two home runs in game two to lead Loyd Star at the plate with four RBIs on the night. Junior Cade Hodges also had a big game at the plate, going 3-for-4 with four RBIs. Cole Smith, Dane Smith and sophomore James Beard each rounded out the offense with two RBIs each.

Sophomore Gavin Burris took the loss on the mound for West Lincoln, going 4.1 innings and gave up nine runs (three earned) on nine hits, four walks and struck out six. Junior Landon Lynch pitched the final inning of relief for the Bears.

Sophomore Garrett Maxwell led West Lincoln at the plate in game two, going 1-for-2 at the plate with one RBI.