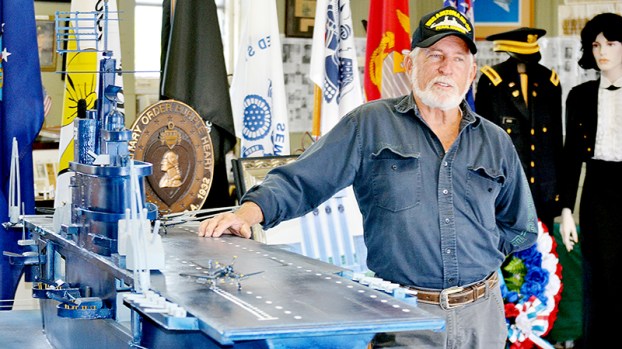 Photo by Donna Campbell/Randall Smith stands with a replica of the USS Princeton he built that is on display at the Military Memorial Museum. Smith has built a memorial for Fireman 1st Class Jim Johnston, of Wesson, who was killed at Pearl Harbor Dec. 7, 1941. Johnston’s remains were finally returned and buried in Wesson Dec. 7, 2016. The memorial will be unveiled at a ceremony at the museum Thursday at 5:30 p.m.

This Army veteran is keeping a secret

Randall Smith has been working on something, but he’s keeping it a secret.

That’s when he’ll unveil a gift to the Military Memorial Museum in Brookhaven. The museum, located on South Whitworth Avenue in the old train depot, is already home to many relics, models and memorabilia related to the United States Armed Forces. Uniforms, weapons, books and medals from individuals and families honor the service and memories of those from Lincoln County and surrounding areas who served their country in the military, dating back to World War I.

This week, Smith will add another display for the museum, to be installed on Wednesday and unveiled Thursday. It’s a gift to honor those from the area who died in the Dec. 7, 1941, attack on Pearl Harbor. More specifically, it is being donated in honor of Fireman First Class Jim H. “Jimmy” Johnston.

Johnston, of Wesson, was 23 years old when he was killed on the U.S.S. Oklahoma during the attack by Japanese aircraft. The attack claimed the lives of 429 crewmen on the Oklahoma and triggered the entry of the U.S. into World War II.

A military board ruled in October 1949 that many of the remains from the Oklahoma were non-recoverable. But Johnston’s remains were disinterred in 2015, and were identified through mitochondrial DNA analysis, laboratory analysis, dental comparisons and circumstantial evidence.

The Navy made arrangements through Riverwood Family Funeral Service and the body of Jimmy Johnston was returned to Wesson, where he was buried with full military honors 75 years to the day from his death. Approximately 250 people attended his funeral, including Gov. Phil Bryant, who placed a commemorative governor’s coin on Johnston’s casket. Bryant also presented a coin to Frank Springs of Wesson, Johnston’s nephew.

Now Johnston is being honored once again for his sacrifice, with the donation from Smith to the museum. Smith enjoys working with the museum and hopes that it will continue to be a place of memories and education for the public.

Smith, who served in the Army and Army Reserve, has worked alone on this project, investing 65 hours of labor, and he’s looking forward to revealing the finished product. “I’m excited about it,” he said.

The public is invited to attend the unveiling.