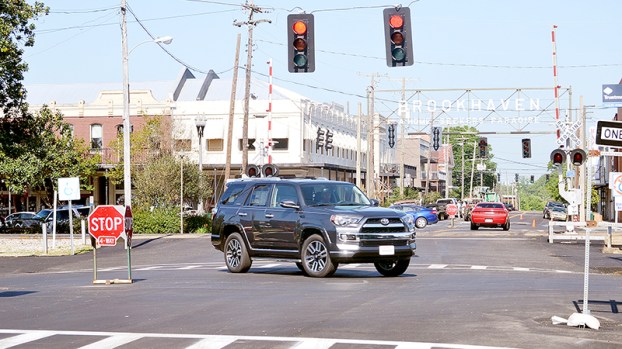 Photo by Donna Campbell/An SUV crosses East Cherokee Street to make a left turn onto South Railroad Avenue Wednesday. Now that South Whitworth and South Railroad are one-way avenues downtown the intersections at East Cherokee have become three-way stops. The stop signs will remain in the middle of the intersections temporarily until drivers get used to the flashing red traffic signals.

The one-way street project for the downtown area is almost complete.

Ryan Holmes with Dungan Engineering reported to the board Tuesday night that the only thing left to do is wait for the asphalt to cure, or dry,  before contractors put the permanent striping down.

“We finished the project last Thursday night, with a little bit left over Friday night,” Holmes said. “We were able to open the roads about seven hours earlier than planned.”

Holmes said the contractors worked long hours to complete the project and they will return to start the permanent striping May 1.

“That’ll go pretty quickly because we’ll just put it on top of the striping there now,” Holmes said. “We’ll leave up the temporary signs and message boards for a couple of weeks until we feel like traffic has transitioned, and then we’ll put up permanent signs. Traffic lights will stay and turn flashing red.”

Large electronic portable signs are strategically placed downtown to alert drivers not to enter a street where they could face oncoming traffic.

The traditional hanging traffic control signals will no longer alternate green, yellow and red. Instead they will flash red.

Public Works Director Keith Lewis said the three-way stop signs will stay in place until drivers get used to the lights.

He urges drivers to be courteous to other motorists who arrive at the intersections at the same time.

He also warned drivers to be aware of people trying to cross the street at those intersections.

“Pedestrians will always have the right-of-way,” Lewis said.

Sawmill Street, Williams Street and Martin Luther King Drive will be also re-stripped. That work should be completed May 1.

In other business at Tuesday’s board meeting:

• Mayor Joe Cox and City Attorney Joe Fernald will be reviewing the draft zoning update from Slaughter and Associates. The final draft should be ready to present to the public after the company receives their revisions.

• Jason Hicks from Sample and Hicks was approved to submit an application for a CDBG grant. The grant will cover the cost to provide a sewer line in the Brignall and surrounding areas.

The cast of the Brookhaven Little Theatre will need to sing only one word to turn the audience into a... read more