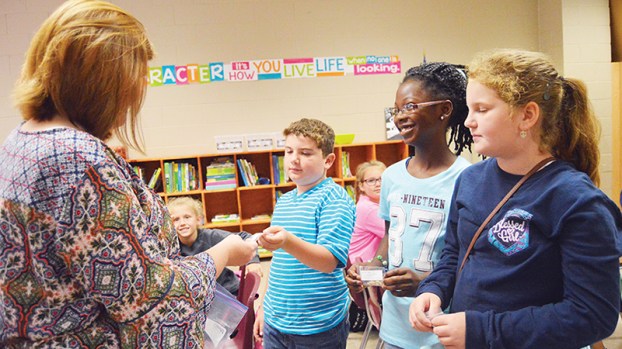 One little seed can produce a gigantic Congo watermelon.

It’ll take at least 85 days, but David Holland promised the local fourth graders that the wait will be worth it.

Holland, president of the Lincoln County Master Gardeners, has been passing out watermelon seeds for three years.

“The kids get really excited and will stop me in the street to tell me that their plants or watermelons are growing,” Ivy said. “It’s really exciting for us.”

Students who plant the seeds are eligible to enter their produce in the Master Gardener’s annual watermelon contest.

“The date has changed, so we want to make sure the parents remind their kids about this new date,” Holland said.

With the help of a few other members, Holland visited every fourth-grade classroom in the Brookhaven and Lincoln County school districts to spread the word about the contest and seeds to students.

Homeschool fourth-graders can participate in the contest as well by picking up their seeds from Rebecca Bates at the Mississippi State University extension service office at 301 S First St. in room 201.

One of the most important rules is to make sure the watermelon seeds are planted in a big grassy area, garden or flowerbed. The seed has to get at least four to six hours of sunlight every day, Kaberlein said.

As the watermelon begins to grow, the tendril will remain green through the majority of the process, she said.

“When it’s near ripening, [the tendril] turns brown. The [skin] of the watermelon while it’s growing will have a frosty hazy look to it,” Kaberlein said. “When that haze is gone, and the skin is nice and smooth and ripe…it’s time to start checking on the bottom.”

“The watermelon must be ripe,” Kaberlein said. “To tell that it’s ripe, the bottom of it will be golden, not the white like it is when it’s growing.”

One test students can complete is what Kaberlein calls a “thump” test. The watermelon will sound hollow if it’s ready.

Holland said Joseph Sauls from Brookhaven Elementary won last year’s competition with a watermelon that topped the scales at 34 and one-half pounds. That’s the same size as an average 3-year-old kid.

“You never know what you could win unless you bring your watermelon in to be weighed,” Holland said. “It’s encouraging to see this generation so interested in growing things.”

Nine Brookhaven School District teachers will each receive a $1,000 grant to assist them in pursuing advanced degrees or administrator... read more