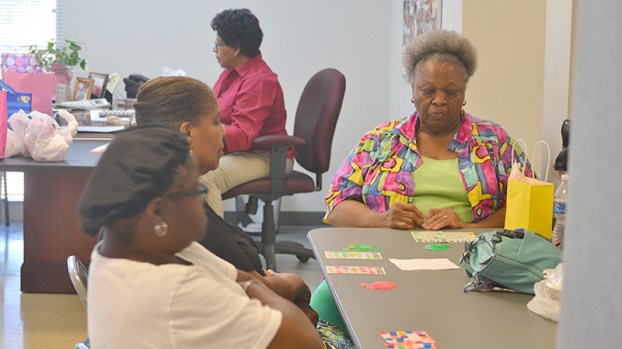 Photo by/DonnaCampbell Bernetta Character wins at BINGO at the Jimmy Furlow Senior Citizen Center Thursday. The facility was built through a Community Development Block Grant in 2008. The CDBG provided $509,827 of the funding needed for the project. Pictured are, from left: Georgia Henderson, Character and Josephine Byrd.

CDBGs are a B-I-N-G-O for Brookhaven

A consultant on federal grants for community development thinks it’s foolish to believe 2018 will see an end to this type of assistance.

“If there were cuts, they would have enormous impact,” said Justin Hicks, a private consultant who works with municipalities like Brookhaven to help apply for block grants. “A lot of small communities apply for up to 100 percent grants, for water treatment and sewage, etc., especially in our state.”

When President Donald Trump released his budget proposal in March, it became clear he planned to cut domestic spending in 2018. One of his targets is the Department of Housing and Urban Development, which oversees the Community Development Block Grant program. CDBGs have been funding much-needed extras for cities and counties for 42 years.

The program’s budget for 2017 is $3 billion, and has not been affected.

The federal government has spent over $150 billion on CDBG since its inception in 1974, but the program is not well-targeted to the poorest populations and has not demonstrated results, according to Trump’s budget proposal. His proposal transfers the responsibility of community and economic development activities to the state and local level, and redirects federal resources to other activities.

Hicks said people need to keep in mind that the president’s proposal is just that —a proposal. Congress is the only entity that controls the cuts, he said.

Hicks said Mississippi has done a good job making the CDBG feasible for the needs of its communities. The state has a total allocation of $23 million for 2017. The goal is to utilize all of those funds, or allocate them, by year’s end. All of the funds are certainly requested, though not all requests are honored, he said.

A city can only apply for one public facilities grant at a time — like a grant to improve a sewer system. The larger match of funds the city can make, the greater likelihood the request will be approved.

If the city can supply 50 percent or more of the total funding, they receive a rating of 50 points. Points grow based on how great a funding percentage is supplied by the municipality, as well as other criteria such as how great the need is in the area for the project being considered. A water and sewage grant is more likely to be granted than a city park upgrade, for example.

Since a city can only pick one to pursue, the one with more points usually gets the application, he said.

If the city gets the grant, they must wait for that project to be complete before applying for another.

Brookhaven relies on the grant program

Since 2008, CDBGs have partially funded construction of:

Cities can also apply for grants to be used for economic development — as many as they like at a time. These grants require that 10 percent of the total amount requested be matched in funds from the municipality.

Because so many communities depend heavily on CDBGs, Hicks believes the cuts will not become a reality in Congress. “It would be hard to believe that they would cut something as vital as this,” he said.

The CDBG program provides funding for affordable housing, health-care and child-care facilities, disaster relief and neighborhood rehabilitation. According to HUD’s website, nearly 74,000 households received housing assistance in 2016, more than 9 million benefited from these services and 17,545 jobs were created.

“It’s the life blood for many cities,” said Stephen Glaude, CEO of the Coalition for Non-profit Housing and Economic Development. “It’s considered one of the most flexible federal programs in that it allows local communities to determine their greatest needs.”

Legislators will meet back in Jackson June 5 for a special session to hash out budgets for the Attorney General’s... read more