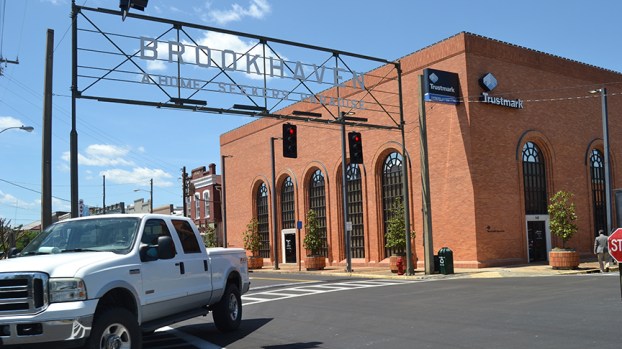 Photo by Donna Campbell/For many, the Homeseekers Paradise sign in downtown Brookhaven is a landmark.

Downtown Brookhaven in the running for “America’s Main Street”

Brookhaven pride is special. And could be prize-winning.

The city is one of 25 quarterfinalists nationwide vying for the title of America’s best Main Street. It’s an online poll and Brookhaven needs votes to win the contest.

“I think Brookhaven made it to the top 25 because we have a community that is so proud of itself and its accomplishments — proud of its downtown, proud of its retail corridor and its quality of life — that they want to show it off to the rest of the country and the rest of the world,” said Garrick Combs, executive director of the Brookhaven-Lincoln County Chamber of Commerce. “There’s a pride that’s special.

That mindset may have been a key factor in Brookhaven making it this far in the “America’s Main Streets” contest, sponsored by Independent We Stand, a national small business movement.

The contest invites the public to vote online for their favorite main street area. Visit mainstreetcontest.com and click on Brookhaven’s profile to vote. Votes are allowed once every 24 hours.

Brookhaven is the only Mississippi city in the contest and one of only a few from southern states.

The Home Seekers Paradise has seen growth in its historic downtown area, with new businesses setting up shop and more buildings being restored. Lots of downtown events also bring new awareness and economic impact to the area.

“There has been an incredible outpouring of love for hundreds of main streets and main street organizations across the country in this year’s ‘America’s Main Streets’ contest and we couldn’t be more excited,” said Independent We Stand co-founder Bill Brunelle. “We are in our second year of the contest and are so happy to see the passion and pride these nominees have for their main streets and the local businesses that keep them alive.”

More than 156,000 votes were cast for 242 nationwide nominees during the nominations phase of the contest, and the field has been narrowed to 25 quarterfinalists.

Quarterfinalist voting runs through May 28 at MainStreetContest.com.

Up for grabs is a grand prize of $25,000 and $1,000 worth of STIHL equipment as well as shopping sprees; online marketing and public relations packages and a plaque.

Combs said if Brookhaven is chosen as the grand prize winner, how the money would be used will depend upon what entity actually receives it — the city itself, the chamber, or even the county. Once that is determined, that entity will decide how best to spend the funds.

“But we really haven’t thought about that,” said Combs. “We’ve just been so excited to be in the quarterfinals of the contest. We’re really happy about that.”

PICAYUNE (AP) — A high school military instructor in Mississippi is facing charges of having inappropriate sexual contact with a... read more