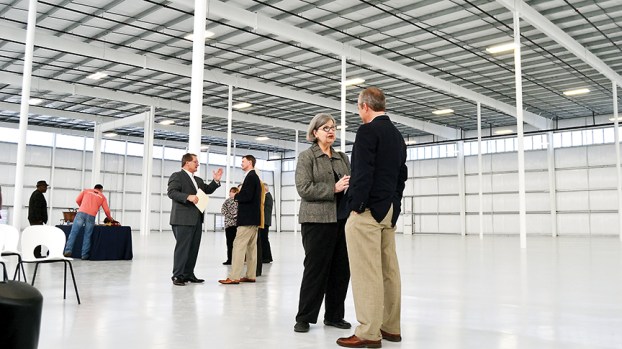 The spec building at Linbrook Business Park is huge and shiny. And it is empty.

Some see its emptiness as a liability. Others see it as the promise of good things to come.

“I’m hopeful for the building,” said District 1 supervisor Jerry Wilson, “but a lot of people didn’t want it.”

“We’ve had a lot of folks look at it,” said Lincoln County Chancery Clerk Tillmon Bishop. “Quite a lot of interest in it.”

“We remain in discussion with several companies and confidentiality agreements prevent me from saying where we are in any of those discussions,” Brookhaven-Lincoln County Chamber of Commerce Executive Director Garrick Combs said. “But I can say that since we have been able to market it, it has quadrupled the interest we have had in that space.”

“That’s four times the number of people interested in the park since we put the spec building up,” Combs said, “than we had before it was built.”

The building is 54,000 square feet, on a pad expandable to 200,000 square feet in a 12-acre lot at 702 Saints Trail in Brookhaven.  A speculative — or spec — building is a structure constructed before a tenant has been found for it.

In June 2015, when the project was moving ahead to build the spec facility, Mayor Joe Cox said, “I’m just proud that we’re going to aggressively market the Linbrook area, and work toward getting a tenant.”

Combs spearheaded the effort to team up with the industrial development company Agracel, which was set to construct a building to house a potential business on 10-20 acres of the 400-acre business park. Having a facility in place that a manufacturer or other industrial company could move into and quickly customize to their needs is huge, Combs said.

“What they do is they come into a market like ours, and they take a look at our property, our community, what we’ve got to offer, and they make a decision whether or not to invest in that community and build a facility in partnership with us,” said Combs, who also represents the Brookhaven-Lincoln County Economic Development Alliance. “And then we all go out and market it. What they’re looking for is a permanent, long-term tenant for the building. What we’re looking for is new jobs, new investment and development of the new industrial park.”

“Speed-to-market has elevated on companies’ must-have list steadily over the last 10 years,” Combs continued. “When a business identifies an opportunity in the market they want to make sure they can capitalize on that. To cut 12 to 18 months off their timeline is a very attractive selling point.”

Justyn Dixon, Agracel regional development director, said the company usually builds when a tenant already is waiting to move in to a completed facility. “So if we’re going to go into an area and put a marketable building in place that doesn’t have a tenant,” Dixon said. “It means we are very interested in the area, and it has a [strong chance of success].”

Dixon said that the pro-business atmosphere of the city, a strong work force and the backing of the aldermen and supervisors speak well for the area’s economic development, as well as its location on the interstate between Jackson and New Orleans. “I think Brookhaven has an excellent opportunity of being successful,” he said, “and we would like to be a partner in that.”

Fast-forward to April 2016, and all the site preparation had been completed, including a 100,000-square-foot pad. Though storms had delayed construction by several months, Combs was now confident that crews could make up for lost time.

The Alliance had received several inquiries on the building since they began promoting the project three months earlier, said Combs.

“Historically, there tends to be a lot more interest in a building than land. Once you complete a building, you’ve eliminated the unknowns,” Combs said. “Even though we’ve just announced that we are building the building, it has already generated more activity than just the raw land.”

The Alliance, Agracel and Southwest Mississippi Electric Power all partnered in this project, and all are responsible for marketing the building to prospective tenants. Combs said all parties were very optimistic for 2017 concerning this project.

In February, supervisor Wilson — who voted in support of the project — told the rest of the board of supervisors his constituents have complained that the building was a waste of money that could have been better spent elsewhere. They felt that an empty building in an empty business park was not beneficial to the county as a whole, Wilson said.

Bishop countered that the building is like eggs at a grocery store — if you want to buy eggs and the store doesn’t have any, you go elsewhere. The building is Lincoln County’s “eggs” for a business ready to move into a new community. No eggs, no business. Bishop has also compared the building to bait for a “big fish” business.

Fish or eggs, Bishop felt the building was a draw for businesses looking to expand to new areas. Wilson said he hoped Bishop was correct.

Combs outlined some specific criteria for the type of company the Alliance is looking to come into Linbrook.

“The company has to be financially sound. They have to be a good corporate partner,” he said. “We will look at their environmental history, their financial history and what kind of noise or odor they will bring. We want nice, neat property. We want an industrial park that develops and provides jobs and investment to the community.”

The county and city have each provided $2.2 million toward the property, including infrastructure and water supply. The Chamber of Commerce has contributed $500,000 and the Alliance secured a $1.1 million grant through the Economic Development Administration.

New businesses bring new people as well. New people bring more money into the area to be spent at local retailers and restaurants and to be otherwise invested into the local communities. The Linbrook project is not just about filling a building — it’s about enriching the city and the county.

If the enthusiasm of the people involved translates well into the recruiting process, 2017 may be the year the spec building becomes the home of Brookhaven and Lincoln County’s newest industry.

Currie: We have a big problem

Rep. Becky Currie spent the weeks after the legislative session ended looking around the state for “pots of money to... read more